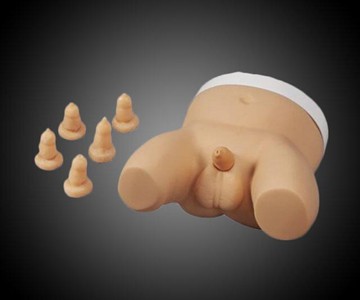 Expecting parents who want to trim the fat from ever-rising hospital bills now have the option to save over $2,000 if they are willing to trim the skin from their newborn sons. Created by Ezra Messer, a mohel with more than 30 years of experience in foreskin removal, the Infant Circumcision Trainer and its accompanying DVD and textbook, Making the Cut: A Parent's Course on Performing Circumcisions, provide the detailed guidance and hands-on practice new moms and dads need to circumcise their own children.

I know what you're thinking. So before getting into the specifics behind the creation and public offering of the Infant Circumcision Trainer, we'll take a step back and address the obvious question: why the glans penis would any parent want to conduct a DIY circumcision?

The answer, in a word, is Obamacare.

From Healthcare for All...

Yesterday, March 31, 2014, was the deadline for Americans both insured and uninsured to enroll in private insurance programs under the Affordable Care Act. Those who applied through their state's exchange are (probably...possibly...) receiving coverage for very low monthly premiums. Even some who opted to stay with their previous carrier are seeing drops in monthly payments. That's not to say they aren't paying in other ways though. From forced changes in doctors to increased treatment costs to higher deductibles, cracks emerging in the Affordable Care Act are demonstrating that less isn't always more.

And for medical providers on the flip side, more isn't always more either. The Affordable Care Act's mandatory health insurance, mandatory individual coverage, and monthly premium caps will almost certainly mean a lot more Americans are going to start visiting doctors and paying visits to hospitals. But it doesn't mean that doctors and hospitals are going to start making a lot more money. Quite the opposite, in fact.

Insurance carriers now required to provide low-cost plans even to high-risk individuals aren't just accepting these exorbitant new expenses they're incurring as the price of doing business. They're trying to recoup that money in other ways. One is through dramatic cuts to their medical provider and hospital per-diem payouts. Basically, doctors and institutions are going to take a hit.

Given how the American economic food chain operates, that means patients are going to absorb the final blow.

Many hospitals and medical facilities are reacting to the increased financial burdens of the Affordable Care Act in the spirit of the airlines: by raising prices and placing additional fees on every minutia of a patient's visit. Want a room with a TV? You got it...for an extra $10 a day. Have a friend or loved one willing to hang out, or even spend the night, in the room for support? Great. But if they want a chair, they better also have an Abe Lincoln for its rental fee. Post-op chicken fingers and Jell-O? Priced a la carte. Calm your rage, though: those who choose not to purchase a meal will still receive non-alcoholic beverages and pretzel snack mixes free of charge.

Although not official yet, there are also serious talks of cutting nurses' salaries in favor of adding signs to patient waiting and overnight rooms. The signs will read: "Gratuities Accepted."

The list of soon-to-be-deemed medical "amenities" goes on, but as it relates to Ezra Messer, that list stops at the Infant Circumcision Trainer.

If you're pregnant or planning to have a child in the future, and you know you want a baby boy circumcised, surprise: your Affordable Health Care insurance policy will not cover the procedure. In all fairness, it's possible your insurance policy never did; some insurance companies consider circumcision a cosmetic practice and have never paid for it as part of the delivery process.

However, those on these latter types of policies have traditionally spent $400 to $500 out-of-pocket for the medical non-necessity. Now though, all pro-circumcisers will feel the flux of the healthcare industry beginning in June, when foreskin snipping will more than quadruple in price. Most institutions state they will charge between $2,000 and $2,500 for it.

On top of the hike's immediate financial implications for new parents, there are also whispers of socio-political agendas backing its implementation. Organizations such as Intact America vehemently oppose circumcision as an unsafe and unhealthy practice that woefully damages the genital integrity and, in turn, the psyche of a child. While their ultimate goal is to outlaw the procedure altogether, once it became clear that the Affordable Care Act would prompt an overhaul of many medical treatments and services, Intact America joined with likeminded groups (NOHARMM, All For Skin) in a hard lobby to make circumcision financially inaccessible, or at least undesirable, to many families that may have otherwise chosen it without a lot of consideration.

Troy Hall, who runs the anti-circumcision Website Circumsadism.org points out, "People don't always listen to a man on the street detailing the injustices of male foreskin removal through a bullhorn, but they usually listen to their wallets."

Ezra Messer says he developed the Infant Circumcision Trainer and its accompanying DVD/literature to keep this procedure accessible to parents who do not have access to it through their religious affiliations, as well as for those who do not choose circumcision for religious reasons. While these parents could of course opt not to have their sons circumcised at all, historically it has been enough of an American custom that, as Messer points out, "Some parents just feel it's best that their sons look like their dads." He continues, "Kids go through developmental periods of feeling insecure and outcast enough as it is. If Dad is circumcised, why give the son one more reason to feel like he doesn't belong?"

Messer sympathizes with those who can't afford or don't want to pay the new rates for circumcisions from medical providers, and since he had the know-how and skills to supply them with an alternative, that's exactly what he did.

The Infant Circumcision Trainer consists of a lifelike silicone replica of an infant's lower half (in 3 color options), a circumcision knife, a Mogen clamp, and a set of foreskins for the approximate 10 hours of hands-on practice Messer estimates the average parent will need to perfect their accurate cutting and removal. (Note: for live circumcisions, parents will need to purchase tools such as a knife and circumstraint newborn immobilizer separately.)

The Trainer package also includes Messer's comprehensive circumcision how-to DVD and companion textbook, Making the Cut: A Parent's Course on Performing Circumcisions. The 4-hour DVD and follow-along literature cover the methods, techniques, precautions, and sanitation requirements crucial to a safe and successful circumcision. A fully illustrated, pull-out reference guide is filled with important reminders and helpful diagrams for use during hands-on practice and actual circumcision procedures.

Is It Safe for Parents to Circumcise Their Own Children?

As with all medical procedures, parental circumcision is as safe as the person performing it. Messer promises that parents who complete his Infant Circumcision Trainer program diligently and responsibly will be at least as, if not more, certified than any doctor in the delivery room. And according to a September 2013 article in the National Post, he may not be exaggerating.

The article describes many docs who routinely circumcise birthed boys as "generalists and poorly trained for the task." Messer's training, on the other hand, is single-minded and explicit. Not only will parents have no peripheral delivery room duties clouding their completion of the foreskin clipping, but from an emotional connectivity standpoint, who on earth will care more about the proper handling and care of a boy's wiener than his mom or dad?

At least until he hits puberty.

Note: The Infant Circumcision Trainer's teachings are intended for use on infants only. While Messer is considering making an Adult Circumcision Trainer in the future, he stresses that the process does not translate from newborns to anyone over the age of 3 without heavy blood loss, probable sterility, and possible inadvertent appendage amputation.

I've met my fair share of Velvet Hammers in my day (pretty sure I even married one) but this is the first Cashmere Hammer that's crossed my path. Too bad it's a rattle for kids, and would be completely preposterous for...

Is that a finger wiggling around in the Well Hung Naughty Christmas Ornament, or are you just happy to...defile the Christmas tree with a mock cock & balls to get some cheap jollies?...