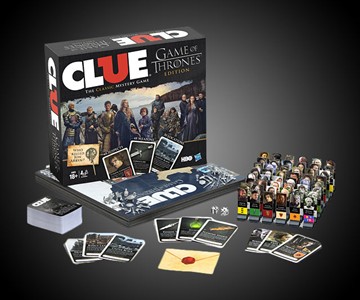 Welp, it shouldn't be hard to find someone to play the murder victim in this rendition of my favorite board game. What will be hard about playing Game of Thrones Clue: uh, playing Game of Thrones Clue. It's like taking your standard Clue board, characters, weapons, rooms, and cards, and multiplying them by the number of times someone has said, "Winter is coming." In the books, on the TV show, and in real life combined. For example, traditional Clue has a total of 324 possible suspect / location / weapon combinations. Any guess as to how many Game of Thrones Clue has?

To highlight the series' fair distribution of death and destruction amongst all, Game of Thrones Clue incorporates 48 suspects, 48 weapons--including Longclaw, Needle, and a direwolf--and 30 locations. Westeros represents! And, yep, that also means the game is open to anywhere from 2 to 47 players. It works too, because the board has been expanded to a roomy 2' wide x 4' long. Go big or go home. Even Tyrion knows that.

Due to the graphic nature of some of the Game of Thrones Clue cards (taken directly from scenes from the show on HBO) and especially the college-level math skills required to keep track of what the F is going on where and with whom during play, the game is not recommended for anyone under 18. Anticipated play time is 3 hours.

Holy Daenerys Mother of Dragons. If I ever propose marriage, or more likely if I ever need to bribe a girl, a ring whose gem is mounted on fire-breathing beasts of fantasy is definitely the one I'm using to do it. ArtMasters...