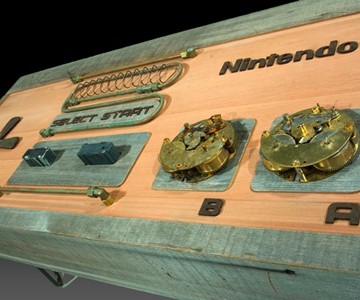 The steampunk Nintendo controller coffee table isn't fully-functional like other versions of Charles Lushear's take on the iconic gaming system, but on the bright side, this means it is less likely to get broken during heated, fist-pounding sessions of Zelda and Mike Tyson's Punch-Out. Still equally likely to get broken when I tackle the Fireball solo...or accidentally trip on the air while sober...and fall on its glass top though.

Functionality and fragility aside, Lushear's latest NES table sets itself apart from all others most markedly with its terrific steampunk aesthetic. Made entirely of reclaimed materials, the piece is just as classy as it is kitschy, and as current as it is nostalgic. Well I think so anyway. But maybe that's just because I like things that make me feel like it's OK to play video games all day in my pajamas with an Ampratite Plasma Pistol in my lap.

This DIY Retro Computer Papercraft Models from Rocky Bergen are fan-frickin'-tastic! And, available as printable downloads, they're also all fan-frickin'-free! A papercraft Commodore 65. A cardboard model of an IBM 5150...

Not sure how much I'd want to swing from the chandelier, but I'd sure like to light it up using one of these Wooden Steampunk Light Switch Covers. I can hear my wife now at our next dinner party: It's time! Get the ladle...