The Myriad Monikers of Gotham's Villains 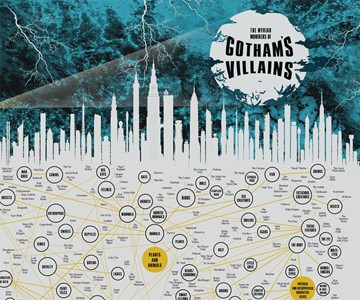 $22
from PopChartLab.com »
Check It Out

Of course there's no escaping the Dark Knight ever, but there's particularly no escaping the Dark Knight this week. Although this tour de force of Batman schwag goes way back--as in even before Batman Begins, Christopher Nolan--to recount 70 years worth of mayhem and destruction courtesy of the Bat world's most devious and deadly. The Myriad Monikers of Gotham's Villains, another superb taxonomical poster from Pop Chart Lab, traces and categorizes the hundreds of nemeses Batman has battled throughout his tenure as DC's golden child.

OK, Batfans, grab a pen and paper. Prepare to make a list of every evil trickster, sociopath, lugnut, seductress, self-aggrandizer, and enterpriser to whom the walls of Gotham City have refused yet to fall. Ready...go!

Did you get The Penny Plunderer? Batzarro? Killer Moth? The Walrus? Dark Knight die-hards and trivia whores, open wide. This definitive history of Gotham's baddest (or at least most desperate) will feed your comic book obsession or satisfy your minutiae cravings for weeks on end.

The Myriad Monikers of Gotham's Villains will be released in a first edition of 500, 18" x 24" prints on Monday, July 23, 2012. Preorders are currently available. Each print arrives signed and numbered by its artists on 100 lb. archival recycled stock.

Be sure to check out Pop Chart Lab's other categorical, cartographical wonders, including The Evolution of Video Game Controllers, Breweries of the United States, and The Magnificent Map of Rap Names.