Breweries of the United States 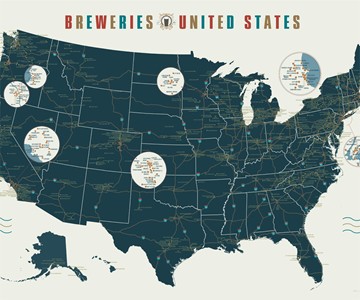 $30
from PopChartLab.com »
Check It Out

According to The Map of United States Breweries, Americans have over seven square feet of wall-coverin' love for beer. In fact, I think the nickname "America's Favorite Pastime" was given to baseball, a sport during which there are 8 combined minutes of action over the course of 3 1/2 hours, as a cover for the true enjoyment to be had while watching a game: knocking back brews. It's about time then for an official proclamation of and homage to the country's true favorite pastime. The Map of United States Breweries does our commitment to beer drinking justice, leaving nary an ale maker out with its geographical pinpoints of over 1,000 of the country's breweries--from handcrafted micro pint-churners to mid-size regional darlings to the giants who tap the Rockies and sell out to the Belgians. The map's only downside is that it's not digital and connected to an app providing the continual updates it's going to need, given the number of new breweries manifesting from thin air almost daily in the Pacific Northwest.

Due to overwhelming demand, mapmaker Pop Chart Lab will begin shipping US brewery map purchases on June 12, 2012, in the order in which they were received. So if you're thinking of the map and your pop and Father's Day on June 17th, you might want to verify that the fancy tube will arrive in time. Or get to work drawing up an IOU.

The Map of United States Breweries measures 39" x 27", and is printed on 100 lb. archival recycled stock certified by The Forest Stewardship Council. The edition includes 1,000 prints, each of which is signed and numbered by its artists.