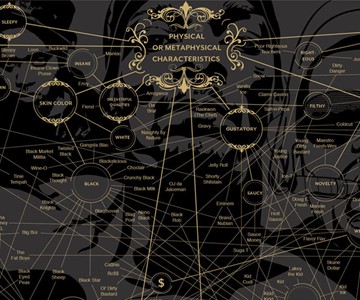 $36
from PopChartLab.com »
Check It Out

An organizational, poster-sized map of the music industry's 636 most prolific rappers: magnificent homage or elaborate slam? Divided into major categories and subcategories, such as Audacious Misspelling, Macks, Coolness, and Guys Named Rob (of which there are 5), this comprehensive compilation and artful rendering of famous names in hip hop is simultaneously fascinating and hilarious.

Let's check out the Audacious Misspellings. We have single-branch rap artists Ruff Ryders, Xzibit, Goon Sqwad, and One Gud Cide, as well as those whose names fit into more than one category, and are thus cross-referenced to the appropriate heading with a gold (of course it's gold) metallic line. Like Chali 2na, who is aligned with the groups Similar to a Cartoon Character, as well as Numbers. Or Layzie Bone and Bizzy Bone, who also fall under the subcategory Bones. Fats, Olds, Bigs, Lils, and Shawtys, they all have a place on the map of rap. And while some may construe the work as satire or a gesture of ill will, I think it's meant to be--and is--sick in a good way. The creation's painstaking detail, spanning over 7 square feet, is truly a sight to behold, and enthralling to comb through.

Each poster is signed and numbered by the artists, and a limited edition of 1,000 has been produced thus far. Orders began shipping on February 24, 2012. Measurements are 39" x 27". The print arrives on 100 lb. archival recycled stock awash in vegetable-based inks.

Holiday stress and depression. Recession gloom. Anger of your favorite movies and TV shows vanishing from HBO Max. Methinks 2023 is gonna be the Year of the Pep Talk. Oh, hey, here's a Pep Talk Generator Poster to help...