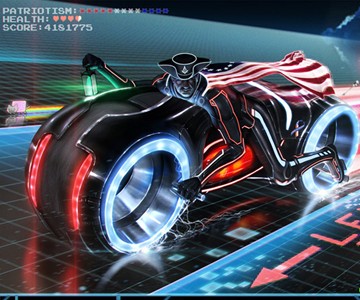 These patriots heard the battle cry of Team America, and hollered back an even louder Fuck Yeah! From Paul Revere's Midnight Ride on a Tron Light Cycle to Abe Lincoln wielding an M16 and giddy-upping on a grizzly bear to George Washington annihilating zombies with the same vigor he used to axe the cherry tree, Jason Heuser's 11 x 17 prints of America's badasses throwing down spectacles of badassery make me especially proud to have emerged from my mama's womb on United States soil.

All scenes are printed on 80 lb high gloss paper, and signed by Heuser. Some online photos have URL text in the prints' bottom corners, which will not appear on hard copies. All 11 x 17 prints are also available in larger sizes, mainly 24 x 36 dimensions for $80. Check out Heuser's complete collection of history's finest upping the ante as superheroes, vigilantes, and The One. In addition to those mentioned above, depictions include:

Executives as distinguished and dominating in the business world as I am require a desk that mimics their persona. Grand and imposing, intricate and enamoring, a desk of presidential proportions. As in, one actually used...

Remember John Carpenter's They Live? If you weren't into aliens and kitschy (yet poignant!) social commentary in 1988, the film suggests that America's "rulers"--the rich, the powerful, the elite, the CEOs and politicians--are...

Once again, RattlerStrap has climbed out from the manufacturing masses, and developed a creative, distinguished contribution to the overpopulated world of survival gear (see paracord belt, fire-starting shoelaces). In...

Oh, don't tell me you weren't expecting a Sexy Mail-In Ballot Halloween Costume for 2020. You had to know, more than any other year in recent memory, this one was going to bring the cringers, eye rollers, and stomach...

You can also get a Chia Hillary Clinton, but I think that one looks more like Benjamin Franklin wearing a necklace...

The Basic Laws of Human Stupidity

No one can say these famous (and infamous) politicians and world leaders (plus Albert Einstein) aren't hot heads when they have Hot Head Candle wicks sticking out of their heads...