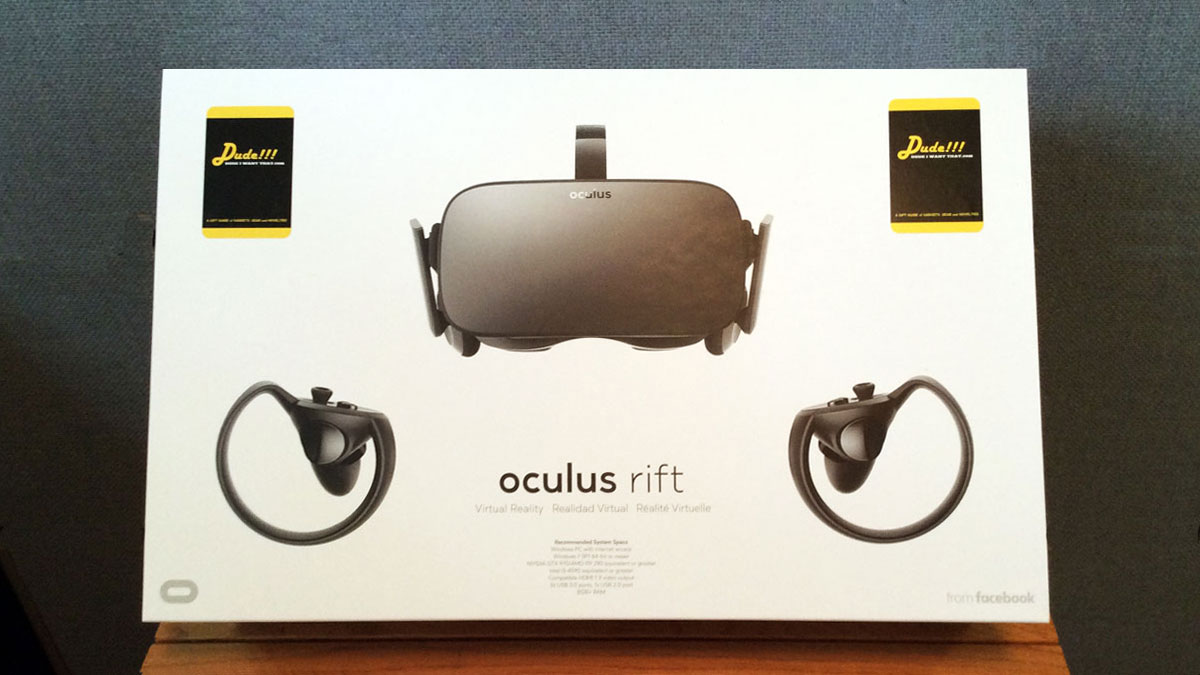 Is Oculus Rift-style virtual reality the only reality of our future, or is the immersive technology a fad with a dead end? And if VR indeed endures, what will it do to our lives? Will people ever leave their homes? Will we interact with one another outside of digital frameworks, will our kids - OK, OK, enough! You can worry about all that next week. This week, click here and enter to win an Oculus Rift + Touch Virtual Reality System! A $400 value!

The first - and only - time I tried an Oculus Rift was a few years ago, on Christmas day, around when the second development kit was sent out. The graphics were...decent. But the experience was...uh...I had to rip off the headset during a wooden roller coaster simulation. Because F real roller coasters. And F virtual roller coasters that are just as scary as real ones.

The Rift has come a long way since my initial test drive, with the company's release of the Rift+ Touch system bringing your hands and a body tracking system to the head game. With Rift+ Touch you can step inside your favorite games, experience VR movies with fantastic realism, and take a 360-degree tour of cities you'd never spend $1,800 or 18 hours on a plane to get to. (Especially if the plane were operated by United.)

The latest Rift headset is designed to fit more comfortably, both physically and, like, in your eyes and brain during viewing. It has customizable and adaptive features enhanced further by the Oculus Touch tracked controllers, which bring a sense of presence and proprioception to your virtual hands. Rounding out the total immersion of the VR experience are the Rift Sensors, a low-latency constellation tracking system that brings you to Matrix-level sensations of presence in your game, movie, or program.

Our winner, or anyone who chooses to get their own Rift system, will need: a Windows 8.1 or Windows 7 SP1 64 bit or newer operating system and internet connection; a NVIDIA GTX 1050Ti/AMD Radeon RX 470 or greater Graphics Card; and a RAM of 8 GB+ RAM.

To register, click here and fill out the Oculus Rift + Touch Virtual Reality System Giveaway entry form. Or, if you're already a member of DudeIWantThat.com, when the magic entry form button appears, just click it to enter.

The Oculus Rift + Touch Virtual Reality System Giveaway entry period is open through 11:59 p.m. ET on Sunday, March 25, 2018. Our drawn winner will be contacted by email within 48 hours of the entry period's conclusion, and will have 12 hours to respond and claim his/her prize. (Should we not hear back from a drawn winner in the specified time period, a new winner will be drawn and contacted.)

Winner should allow up to 3 weeks for prize delivery.

Once winners are drawn and confirmed, they will be announced above.

Are you an online retailer with a Dudeworthy product you'd like to grace upon our readers? Consider a Dude Giveaway partnership! Click here for details on prerequisites, giveaway procedures, and our contact information.

Proto's forthcoming M is a tabletop holographic communication / media device and, in my opinion, the newest best way to have dinner with your in-laws. Look at how happy that mom and baby look talking to Hologramma on...

The Emerge Home is a forthcoming VR companion for the Oculus Quest 2 virtual reality headset. A very, you could say, touchy-feely companion. The Emerge Home system uses the Emerge Wave-1, a device that emits ultrasonic...

Boldly go where only Geordi La Forge has gone before. Avegant's Glyph is a Kickstarted mobile personal theater that wears like a combo of over-ear headphones and a Star Trek VISOR. Use it to watch movies, play games...

Lucky for us, PowerUp still hasn't gotten past the making paper airplanes stage of its life. The PowerUp FPV follows the company's original electric homemade paper airplane kit (charge it for 20 seconds, fly it for 30)...