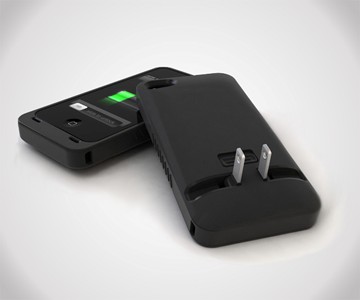 Even as a stubbornly loyal flip phone user, I am overtaken by the brilliance of PocketPlug, a high grade polycarbonate iPhone case with a fully-integrated, retractable charger. And I hear the iPhone's battery power leaves much to be desired too, so PocketPlug is even more than brilliant. It's brilliant to the power of Chuck Norris. Because even with sound battery power, for all Apple's nifty, streamlined features and accessories, iPhone users are still tethered to that damn cord and outlet nub during scheduled iPhone feeding times. Not to mention during those increasingly frequent occurrences of the little bastard sucking down all of its juice while you're in the middle of a heated Words with Friends exchange. It's like, all of a sudden, the whole of life comes to an unexpected and infuriating halt. All activity must cease as you scrounge up the electrical current Kool-Aid that will recharge your GD phone.

Lesson: dead batteries are hell, and space-consuming charging cords that we must remember to carry--and manage not to lose--do only a passable job of dragging us out of its flames. But PocketPlug. PocketPlug is like a cooling mist of Capri-Sun cascading down from the heavens. It is 100% cords unnecessary (though if for some reason--say, during syncing--you want to use one, it does have a micro USB pass-through).

Created by Lloyd Gladstone, Jesse Pliner, and their mad skillz team of engineers, the PocketPlug case is currently in pre-production phases, and seeking funding on Kickstarter through May 13, 2012. Backers at the $55 level and up will receive a PocketPlug in black, white, or the Limited Edition Kickstarter black and white versions with signature lime green accents (when cases hit the public market, retail price will be $70). Shipment is tentatively set for this summer, though investors also have a choice between a PocketPlug compatible with the currently-available iPhone 4/4S, or with the next version of the iPhone, for which the company promises to start designing the moment its specs are released.

December 2013 Update: PocketPlug exceeded its crowdfunding goal, and is now available for direct purchase for iPhone 4 and 5 models through maker Prong's website--follow the link below.

The Mac Classic just never stops being...classic, does it? Shargeek's Retro 35 Mini is an obvious, albeit not obviously stated for licensing reasons, reimagining of a yesteryear Apple Macintosh into a 35W USB-C charger...