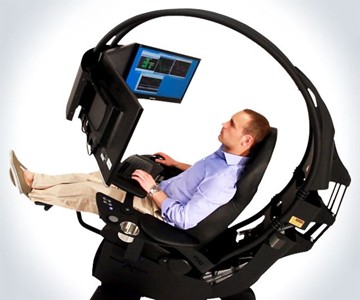 The pinnacle of functionality and comfort and it looks like a scorpion? At nearly $6,000, the Emperor 1510 workstation may require a CEO-sized wallet for purchase, but given that owning one may actually make me want to work 120-hour weeks...or at least 20-hour weeks...which would still be 4 times more than the 5-hour weeks I currently log...I'd probably recoup my costs within...I don't know, someone who's good at math story problems figure out the specifics. It wouldn't be very long and the initial investment would be worth it is my point. Because once I had the hybrid chair paid for, I would obviously redirect my efforts to contribute to the rat race to more important endeavors, such as using the Emperor as an aid and prop in becoming the next Dr. Claw.

In addition to its ergonomic design and all-inclusive, compact work space setup, the Emperor 1510 features:

If you want a smart workstation with a futuristic look, in-desk display, a full top surface of wireless charging, power outlets galore, and nary a cable in sight, I think you're beginning to see the Lumina. The Lumina...

Desk chair extraordinaire Herman Miller has teamed up with tech mecha Logitech G on the Vantum Gaming Chair, an ergonomic performance seat made, if you hadn't already guessed, especially for gamers. Herman Miller and...