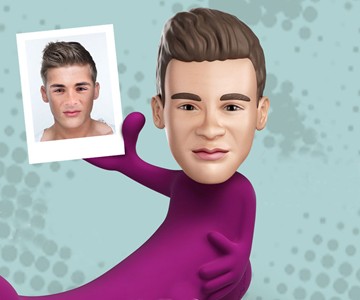 $99
from Wobbling Willy »
Check It Out

Or any fella of your choosing. Imagine, ladies, having a dick with 2 heads at your constant disposal, and imagine if one of those heads were Ryan Gosling's!

A Swedish Dr. Frankenstein created the Wobbling Willy in 2015. It is a "subspecies clone of Homo Sapiens and classified as the genus Dickus Erectus." Create a personalized Dickus Erectus of your own by e-submitting a few head shots (er, photographs, not sperm samples) of your desired subject to Wobbling Willy. They'll work to turn the pics into a dildo-proportioned 3D sculpture, and then mail you - or whatever girlfriend, ex-girlfriend, or friend Cornelius you desire to have the Wobbling Willy - the results in a discreet package. Along with a faux suede pouch to class it up even more.

And an instruction leaflet in case your recipient is the type who needs directions on how to go F themselves.

Despite its name, the Wobbling Willy doesn't really wobble. At least not in the Bobblehead sense. But, if you give it a "firm and distinct shaking" you might be able to get some Night at the Roxbury dance moves out of it.