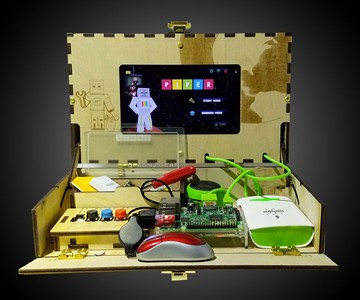 I know the Piper looks like a computer kit for kids, but the company swears it would make a sweet gift for your dad too. Or your grandma. Or your Uncle Stu. At its heart, Piper is a teacher of technology available to anyone who wants to learn hands-on how computers work*.

The Piper Computer Kit starts users with the nuts of bolts of programming: building the computer to program. You'll have everything you need to assemble a functional computer (even a Piper screwdriver), from the wooden computer case pieces and HD LCD display, to the Raspberry Pi 3 Project Board with 1GB of RAM and a 1200 MHz QuadCore CPU. Additional Piper build components include:

Once the Piper computer is up and running, you'll move on to programming PiperCraft, a Minecraft story mode adventure whose creation and progress you'll be able to store on the included 8GB SD card.

*Probably people between the ages of 6 and 12 will dig it most though.

When I read the Flipper Zero described as a "Tamagochi for hackers," I assumed someone had finally found a successful way to teach tech bros EQ. And in a way, maybe the hackerspace-born team of Flipper Zero creators has...

Your focus, your drive, your QWERTY fingers, they're on fire! Make sure the laptop you're using to execute your plans for world domination isn't too with MOFT's new Cooling Stand, an ultra-thin attachment for your laptop...