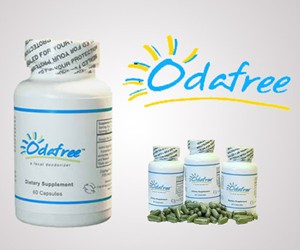 Odafree is an over-the-counter supplement ingested to combat odors associated with the excretion of feces and flatulence. Without the euphemisms? It's a daily pill that claims to remove the stench of hot death from shit and farts. Originally conceived for medical conditions, such as incontinence, irritable bowel syndrome, colitis, and post-op bariatric surgery, Odafree is now available to all boys and girls who are tired of trying to scrounge up matches and plumeria room spray at friends' BBQs when the brats and kraut and 8 Miller Lights start wreaking havoc on their GI tracts.

Rather than simply masking odors, Odafree claims to neutralize them by diminishing the chemical compounds responsible for the telltale aromas of, "Who farted?" and, "Ugh, don't go in there." If taken properly, that is. Effects are noticeable after about 2 weeks, and pills must be taken as a daily supplement indefinitely thereafter if the stink-free living is to continue. Each bottle contains 60 capsules, so about a 2-month supply. At $15 a pop. Times 6 is...$90 a year not to get heckled at parties and forced by your significant other to sleep on the couch every time you enjoy a bowl of chili. Seems like a pretty good deal to us.

Side effects--aside from the successful reintegration into society--are minimal, and include green stool, which is due to the chlorophyllin component of Odafree. And the best part? When hicks and Andre 3000 hurl the, "You must think your shit don't stink," insult at you, you can politely inform them that they are correct. Your shit, in fact, does not stink. It smells like a proprietary blend of naturally occurring elements, herbs, and vegetation.

Swimming Poo's STEAM blurb describes it as "a humorous action game," but that's about as full of crap as Swimming Poo itself. Humorous? If your favorite jokes start with "Pull my finger," or "So I was taking a dump the...

Flipping the bird becomes much more than a cheap gesture with this Middle Finger Toilet Paper Holder. Instead, Pygmallionaire's 3D-printed and hand-painted metallic design is a functional luxury!...

Bet you never thought you'd describe your laundry detergent as "bold" and "soulful." And maybe you won't. But Laundry Sauce does...

Now I wouldn't call myself an Incense Dude - I'm more of a Rug Dude, obviously - but I am digging this Pumpkin Backflow Incense Burner as a gift for Halloween. It's countertop-sized, so much more subtle than the <a...