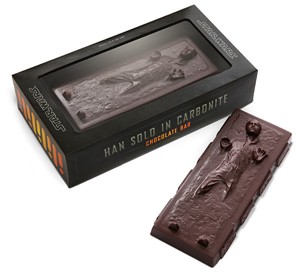 What took them so long? Although I'd prefer an Augustus Gloop drowning in chocolate bar, Han Solo's plight lends itself nicely to aiding in the fattening of America as well. Jabba The Hutt, although posing no long term threat to the great Wonka, diversifies vertically here with his first foray into the candy business. And we think he has a winner on his hands. I see stockings overflowing with chocolate this Christmas. Yes, I do.

Diabetic? Don't worry. Jabba is a businessman and he wants to tap every demographic. Checkout the Han Solo Frozen In Carbonite Ice Cube Trays. Still waiting on some Slave Leia products to salivate over.

L.A. Burdick Chocolates has whipped up this winning waddle of penguins to wish you - and your choco-lovin' belly - Happy Holidays! The chocolatier's Chocolate Penguins gift box contains 9 "tuxedoed birds of Antarctica"...