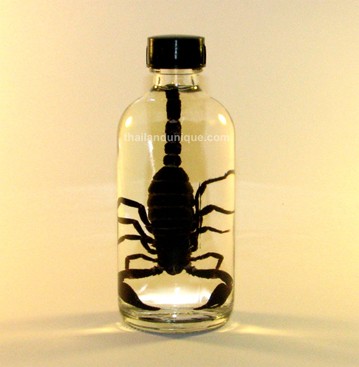 $10
from Thailand Unique »
Check It Out

Mmmm... Delicious banana flavored scorpion vodka. I've been dying for some of this stuff. Equally as refreshing after a long run as when you wake up in a shallow dirt grave across the Mexican border. Nothing takes the sting out like scorpion vodka.

This special distilled Thai rice grain vodka is infused with a real farm raised Heterometrus Spinifer scorpion and flavored with banana and sweetened with Thai sugar cane. The vodka is steeped for several months, which then imparts a unique flavour into the liquor, the vodka is then sweetened and flavored to taste. The story is that this is used in SE Asia as a Aphrodisiac; and it also has medical uses, such as the treatment of back and muscle pain. Every bottle is unique in its own way so therefore the item purchased may differ slightly in looks but not size.

Of all the gross applications of otherwise fine foods, the VELVEETA Veltini Kit is definitely...one of the better ones. Cheese, olives, vodka, vermouth, and, and Jumbo VELVEETA Shells & Cheese?! I mean, sure, it looks...