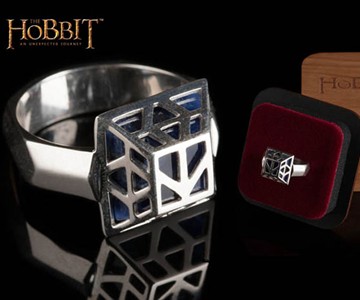 $189.95
from Secret Compass Collectibles »
Check It Out

Planning to ring in 2013 with a dissociative fugue wherein you assume the life of a JRR Tolkien character? Hey, me too! I'm going with Thorin Oakenshield, King Under the Mountain. I've already booked my ticket to New Zealand and plotted my takeover of The Hobbiton, and am hoping that once the psychiatric disorder sets in, and my true Thorin self emerges, I'll devise an equally masterful plan to locate and regain control of the Lonely Mountain. In the meantime, I need to pre-order this ring.

The Ring of Thorin Oakenshield, a heartstopping presentation of Dwarven jewel and metal handiwork, encases a blue sodalite stone within a sterling silver cage. For Thorin, it serves as a reminder of his loss of the Mountain, his home, a kingdom, and his pride. For me, it will serve as a reminder that I am an enormous--and enormously proud--geek. But I won't really have to make that publicly known because anyone who isn't a geek too will have no idea what the ring refers to, and just assume it identifies me as a man of impeccable taste who enjoys the finer things in life.

A natural Cherry timber box lined with burgundy velvet and engraved with logos for Weta and The Hobbit: An Unexpected Journey houses the ring, a collector's item that is currently still in production. Interested buyers may reserve theirs now by fighting valiantly during surprise Troll attacks and paying a small deposit to vendor Secret Compass.

The One Ring Firepit

How do I plan to make it through the winter? Bohemian Alp Designs' Lord of the Rings One Ring firepit, many gallons of hot cider & whiskey, and a recording of Johnny Cash's "Ring of Fire" warped to sound like Gollum is...

Officially made and sold as Hobbit Hole chicken coops (or scale-mail-clad guinea pig coops! The uprising, it is all coming together!) these Lord of the Rings-inspired homes for the yard also serve as dog houses or kiddie...

Whatever, I could make a Bilbo Baggins Bag End Bonsai. Or I could if I had the meticulous, exacting hands of a surgeon. But then I'd probably just be a surgeon because I bet it pays more than selling miniature Japanese...