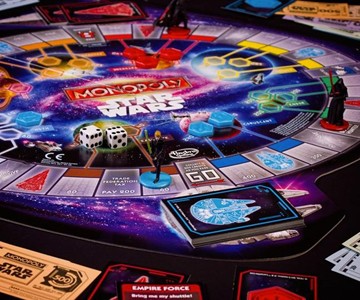 When The Force Awakens on the Monopoly board it's not about getting rich and hoarding real estate, it's about...uh...getting rich and hoarding planets. This newest edition of Star Wars' Monopoly takeover gives players a choice of battling for galactic control as either Rebel or Empire figurines. The game includes a mix of forthcoming Force Awakens characters and your favorite OGs from Episodes IV, V, and VI.

The Rebel Force controls Community Chest cards, while the Dark Side takes dibs on the Chance stack. Players work around the board trying to earn enough money to buy planets, where they can then set up a base. S/he who dominates the planets wins the galaxy. With this Force Awakens edition, the Monopoly board itself has also gotten a Millennium-Falcon-round makeover with a seizure-worthy spread of interstellar shapes and bright colors.