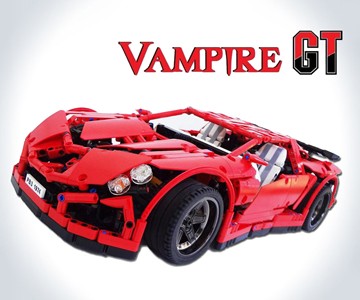 The undead beast has arrived. Paul Boratko spent years mulling over and designing his Vampire GT Supercar. Its gull-wing doors. Its menacing front fascia. Its groundbreaking chassis. In July 2011, he began tinkering with a new transmission, one that both shifts differently than the standard 5+R gearbox, and has gear ratios more reflective of those on the street-legal vampire whips driven by the likes of Nosferatu and patent leather-bodysuited Kate Beckinsale. Now, masterpiece complete, Boratko has submitted the Supercar design to LEGO CUUSOO, where it needs 10,000 votes of support to earn a LEGO production review. The count is currently upwards of 500. (Voting is free, and takes less than 2 minutes. Click here to vote and help turn the myth into a reality.)

Boratko speculates that if LEGO proceeds with mass producing the Vamp, it will fetch $150--this based on the fact that the car has all manual, rather than power functions and elements. The two prototypes Boratko has thus far hand-built himself are worth upwards of $600 in parts and elbow grease. Note that the car also employs 4 LEGO parts that have been discontinued, including black 19-length flexible axles and black bushings. However, should the company pick up this bitchin' bloodsucker of a LEGO creation, perhaps they will reintroduce the bygone parts as well.

Check out more information about and photos of the Vampire GT, as well as other phenomenal LEGO creations, on Boratko's Website, Crowkillers.com.

Kick it with LEGO and Adidas this summer, courtesy of the brands' collaboration on this LEGO Adidas Originals Superstar Sneaker. At 731-pieces the shoe, like the LEGO Typewriter, is another adult building brick kit intended...