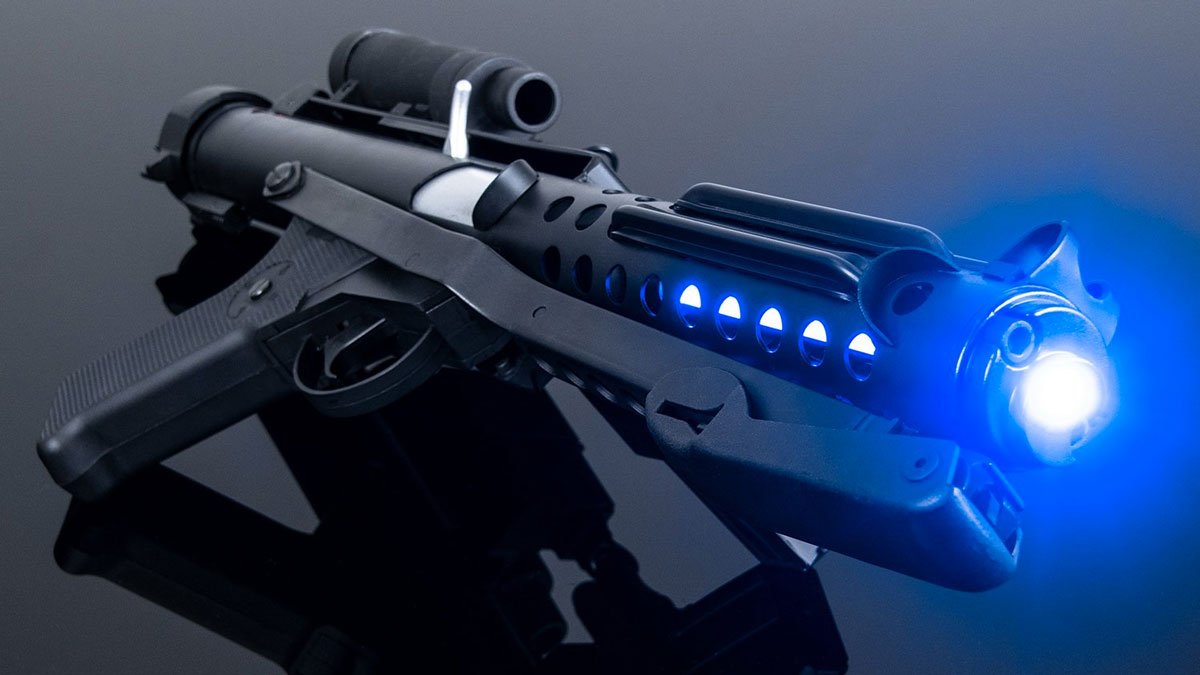 Who wants a shot of Vitamin E-12? SaberForge has already established themselves around here as a formidable weapons builder, but to date I've mostly wet myself over their custom made lightsabers. With the E-12 though they've left the blade fights behind for a multi-role blaster, and an evolution of the Empire's standard stormtrooper issue, the E-11 assault carbine.

The E-12 Blaster is made of metal alloys and weighs a hefty 6 pounds. It has a functional scope, removable magazine, and folding stock. For sound and lighting effects, it is fitted with Spark 2 electronics and a 12W Quad Cree Red / Blue LED.

The E-12 also improves upon several features of the E-11 blaster. First, it has 3 distinct fire settings: Assault, Heavy; and Stun. The blaster also has a new overcharge blast on each fire setting - assault fires a full auto barrage, Heavy a super heavy burst, and Stun an ion beam. The E-11 opted out of Heavy mode and overcharge blasts due to concern over stormtroopers wasting energy packs. However, additional research indicates that bearers in combat actually achieve a much higher hit percentage when they "they spray every joule from their battery packs in wild barrages."

Speaking of which, yes, my friends. The E-12 also comes with an improved shot accuracy design. According to SaberForge this blaster will hit 100% of its targets 60% of the time.

You've seen Saber Forge's custom made lightsabers around here before. But now the company is taking to Kickstarter to give you the opportunity to do the custom making yo

How is it possible that the Italians--the Italians!--are the first people on Earth to create a nationwide franchise of lightsaber combat academies? If not the US I could maybe, maybe see Japan taking the lead here, but...