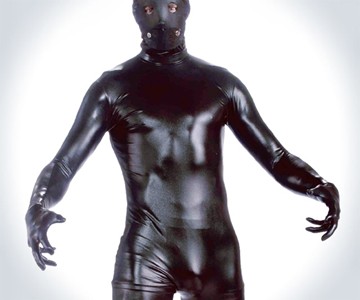 Bring out the gimp. The gimp's sleeping. Well, I guess you'll just have to go wake him up now, won't you? Wait...wrong S&M fetish scene. The Rubber Man suit is an American Horror Story derivation. Just as well, I guess. I really hate seeing Bruce Willis with something in his mouth the exact shape of his head.

According to American Horror Story lore, very little was known about the pictured Gimp until the first season's 8th episode, entitled "Rubber Man". In it, we found out Rubber Man is Tate, who first used the S&M beaut to kill Chad and Patrick, the former of whom originally bought it to seduce the latter because, hey, everyone's into gimps aren't they? In using the full-body black suit made of what appears to be a host of entirely unnatural fabrics himself though, Tate somehow hoped to steal a baby for Nora. Sounds like a neat guy. Who wants to dress up like him?

The Murder House fetish suit has a latex-like design with small eye and breathing holes that maintain the flow of oxygen to the wearer's vital organs while preventing others from identifying him or her to law enforcement officials. The seller describes Rubber Man's suit as "alarming" and I would have to agree with that choice of word. However, Easter's coming up and I need a costume, so...here goes.