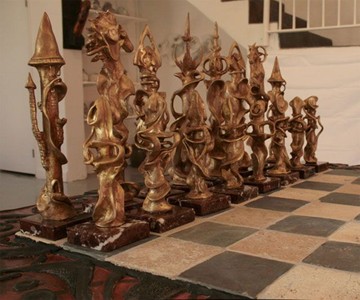 $10k
from Raul Lopez Pomares »
Check It Out

Obviously I like this chess set because most of its pieces appear to have leapt right out of my VHS cassette of Beetlejuice, one of the best 80s movies ever, as evidenced by the fact that I am saying so right now. I sure hope its King Must Die eponym is only figurative though, because what a shame to drop 10Gs on a cerebral exploit Raul Pomares surely spent in the 3 digits of hours carving by hand only to have one of the kings spontaneously burst into flame (this seems to be the most logical form of death for a wooden chess piece) upon completion of game 1.

Pomares' slate/travertine board--also his own forging--measures 46" x 46", and holds 32 unique sculptures representing its pawns, rooks, knights, bishops, queens, and kings. Each piece is whittled from wood and sits atop a marble base. Other materials contributing to the set's composition include epoxy clay, ink, varnish, and paint.

As an artist, Pomares strives to create objects that serve a purpose, that can be used, so that an owner or admirer will "immerse him/herself in that world and interact with art rather than observe it." In addition to the featured chess set, he also sells ornately carved bottles, as well as displays a gallery of (sadly not for sale) sick wooden guitars and hookahs on his Website. Pomares will entertain commissioned work. Someone should ask him to make a letter holder that looks like the shrimp cocktail that grabbed Otho & Co. by the face at the Deetzes' dinner party.