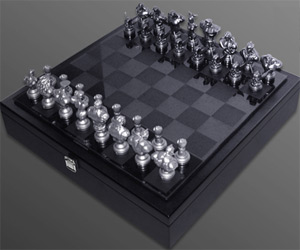 Chess pieces have risen from the rough-and-tumble streets of their transcontinental hometowns in detailed, silver- and pewter-colored resin measuring 1.75" to 3.25" tall. No comment on which sizes correspond to which fighter nationalities. Each fighter also has its corresponding traditional chess icon sculpted on the front and back to facilitate play. Good thing too because, damn, chess bludgeons my brain enough without having to remember which Muay Thai warrior is a King and which sumo is a Queen. The roster includes:

The Street Fighter chess board is a big boy, at 18" x 18" of smoked and sandblasted glass. Also included are a black wood storage case with chrome latch and hinges, and a Street Fighter 25th Anniversary logo laser etched into the lid. The storage case doubles as a playing surface, with small holes for nesting the glass board's feet.