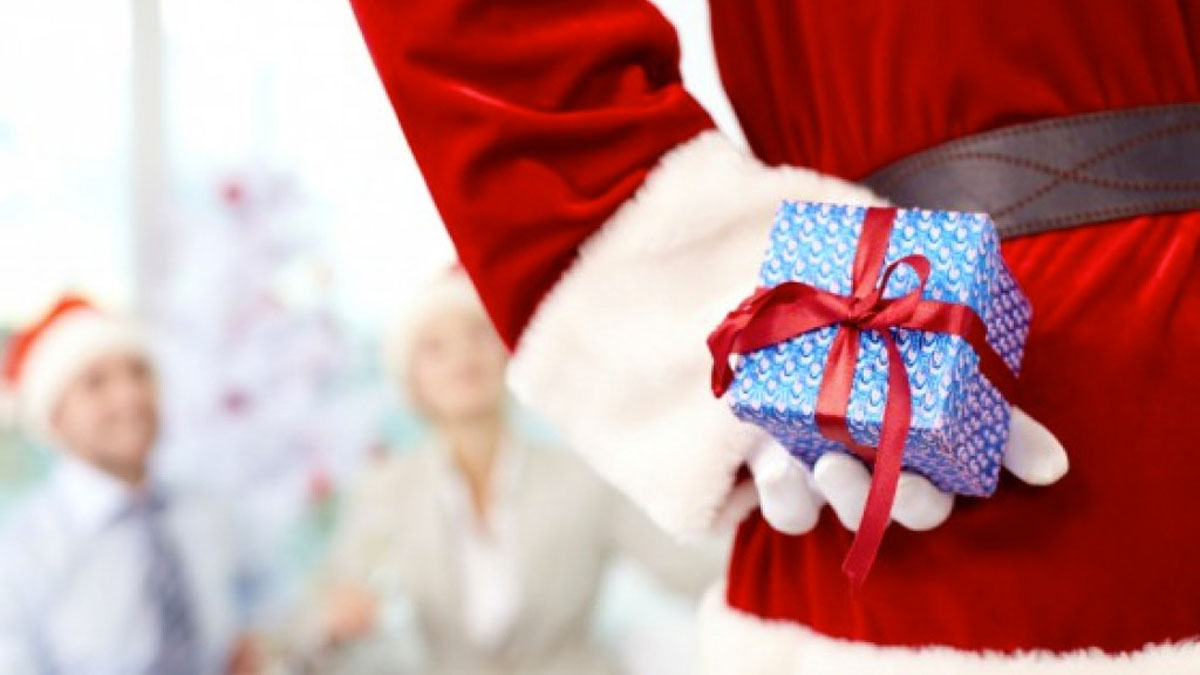 In most cases, Secret Santa participation merely perpetuates the exchange of crap. Reindeer doilies, Dilbert mugs, giant jars of Brach's assorted hard candies, nothing that will stick around more than 24 hours before landing a spot in the trash. Or inside a fresh wad of wrapping paper for the White Elephant party you have tomorrow. But if you don't take part in these gift-giving festivities, you're labeled the Office/Class/Family Scrooge. Any way you look at it, you're getting the short end of the peppermint stick. Unless you turn to us. Your personal Santa Dude. Below we've compiled our 15 best bets not only for dispensing a Secret Santa gift that doesn't suck, but for dispensing a Secret Santa gift that earns you high-fives all around and a reputation on par with the fat man himself.

For that person in your office you'd like never to have kids again to make a glowing impression on, these highly radioactive perfectly safe! keychains are the ideal gift. They also hold keys. Buy Now.

These tiny, yet curiously strong, neodymium discs even look like mints. But remind their recipient not to eat them unless the intent is to Magneto to his or her gut every paperclip, pair of scissors, thumbtack, and Nuclear Magnetic Resonance Imager s/he passes. Buy Now.

Belly laughs and sexual innuendo abound as Frosty steals a fellow snowperson's nose and inserts it on his crotch. Suitable only if you've drawn the name of someone who has been...or who wants to be...naughty this year. Buy Now.

With a composition of 99.8% air (carbon dioxide) and 0.2% silica gel, and the ability to withstand a direct blast from up to 1KG of dynamite, Aerogel was developed by NASA for use in insulating the Mars Rover, proving once again why "rocket scientist" is the standard profession tossed out to establish someone's intelligence. Give a glob to your favorite egghead. Buy Now.

For the adventurer, the outdoorsman, or the resident of any locale with bacteria-infested water. Removes 99.9999% of protozoan parasites eager to build armies in small intestines. Buy Now.

Whether you get stuck buying for an 8-year-old or a 68-year-old, this shiny silver mass that begins liquifying at 85.85 degrees F is sure to get some Ooohs and Ahhhs. Give it to a hot 28-year-old and it might even get you laid. Buy Now.

How do you declare a thumb war in Wookieespeak? Secret Santa this saber battle ring to the Star Wars fanatic on your co-rec soccer team, and I'm sure he'll be more than happy to tell you. Buy Now.

Definitely give an Iron Samurai watch to anyone you know who is color blind or has no depth perception. Buy Now.

The Bug-A-Salt might be the coolest thing invented for killing winged and many-legged pests since clapping your hands together and not coming up empty. It deals death using no more than a few granules of table salt and human pumping power. A must-have for any boardroom. Buy Now.

Yeah, it's a coffee mug. But it's a coffee mug fashioned in the likeness of a Rubik's Cube, the most challenging and square puzzle ever invented! Give one to a brainy prude who sublimates desires with caffeine, and maybe they will see a little of themselves in your thoughtful holiday offering. Buy Now.

Santa may replace kiddies' dead guppies with live guppies, but Secret Santa replaces them with a Guppie Multi-Tool. It will last closer to forever, and also persuade the other kids to put a sock in it when they make fun of Bobby for crying over dead fish. Buy Now.

Still can't find anything your picky Secret Santa gift recipient will gush over? Screw them! Find something for yourself...

Guess we don't have to worry about the cat knocking down the Christmas tree this year. Hey, honey, your Uncle Joe likes fried cat, doesn't he? Or at least he won't be able to tell the difference between it and honey-roasted...

If T-Rex can't high-five or do pushups, then you in a 3D T-Rex Ugly Christmas Sweater can't sit down or move freely without risk of taking out people's drinks and cheese plates...