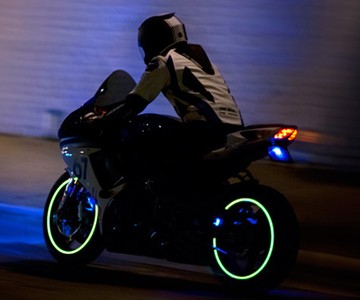 Lunasee ASL wheel lights for motorcycles increase rider visibility and safety by providing active side lighting over a broad range, even when bikes are outside the direct path of another vehicle's headlight. That the wraparound installation in action is reminiscent of a TRON Light Cycle doesn't hurt its cause either.

Lunasee installations do not require the addition of batteries or electronics to your wheels. Instead, a 4mm wide, nearly weightless phosphorescent pin stripe is applied to each rim, and as the wheels rotate, the attachments charge via LEDs mounted to the bike and wired into its power supply. Packages are available for both one and two wheels.

Better make sure you've got both of Rinzler's identity disks before heading into battle with the wife for permission to drop $1,300 on this form-molded set of leather badassery. UD Replicas made 750 TRON full body motorcycle...