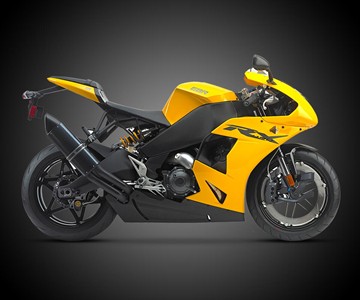 And I thought cheese curds and Heather Graham were the best things ever to come out of Wisconsin. From the humble city limits of East Troy, Erik Buell is releasing his first big production motorcycle under the Erik Buell Racing brand. The EBR 1190RX also aims to establish itself as another first: the first high-end American sportbike. Comparable to competitor Ducati's Panigale and the Aprilia RSV4, but, you know, bigger and better. I'm sure sport riders will have varied opinions on the veracity of that sentiment, but at 185hp, and equipped with the highest torque available on a street-legal production bike, the EBR 1190RX is at least worth a second look.

You can check out a EBR 1190RX test ride review and more photos from Cycle World here.