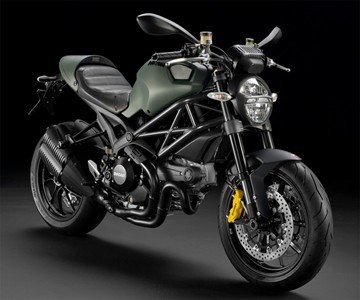 Ducati and Italian clothing designer (not gasoline classification) Diesel teamed up in 2011 to begin collaborations on a fashion-forward motorcycle. Just over a year later, the Monster Diesel marked its arrival, and Ducati is currently accepting reservations for the special edition bike's summer 2012 release.

The Monster Diesel, based on the Ducati Monster 1100 EVO, has a two-valve 100 HP Desmodue Evoluzione engine, souped up with a "slipper"-system-driven wet clutch and ABS. The traditional black trellis frame remains, but the overall look of the bike has received an "urban military chic" upgrade via a Diesel Brave Green accent wash, and yellow front brake calipers. Other new and dedicated parts include passenger seat and dashboard covers and exhaust system heat shields. The "Diesel" shout-outs include the company name and logo on the seat, as well as body etchings of their signature mohawked man. "Ducati" still appears in its standard locations.

I have to admit, the closest I've ever gotten to driving a Ducati--well, any motorcycle really--was in Athens when this androgynous dude rolled up to my hostel on one, and later offered to let me drive it to the Acropolis at 3 a.m. As soon as I reached for the keys, he gave me a smarmy grin and threw in the, "Trade a ride for a ride" caveat. Mother F'in Greece. I should've known better.

The point is, I don't really keep up on motorcycle culture. So in an effort to determine if the Ducati Monster Diesel is in fact something dudes (and ladies) would want, I took to the streets in search of feedback from informed parties, hoping to gain some enlightenment. Little did I know how polarizing the fleeting hookup of unbridled speed and slim-cut denim could be.

"It rides like a Ducati, and looks cool. Kind of camouflaged and low-profile. Who cares whose name is on it?" - Paul T., bike owner

"Every once in a while Ducati does a limited edition bike involving a clothing designer, like Neiman Marcus, or in this case Diesel. It's hard for me to not find it incredibly lame, and I wish they wouldn't do that. But the bike does have unique mufflers which I like. But nothing mechanically different and no performance upgrades. Essentially, just a different paint job that you pay extra for if you really feel Ducati and Diesel clothing express who you are as a gay man." - Gary P., Commando Alpha

"At least they didn't take a page out of the circa-1998 Ford Explorer book and team up with Eddie Bauer." - Chris R., guy in line at the taco truck

"I don't know, what do you think?" - Kirk T., guy holding girlfriend's purse

"The Monster 1100 EVO is badass. It steers light and quick, and makes it really easy to pop in and out of traffic. It always feels like you're going fast even when you're not. This is basically the same bike with a fancy name on it. I don't know if that's worth a couple grand more, but...I don't look at it and want to chuck it off a bridge or anything." - Tom L., wizened motorcyclist

"Can they team up with Victoria's Secret and make me one with Brooklyn Decker on it?" - Bill C., clever devil

Anyone else care to weigh in?