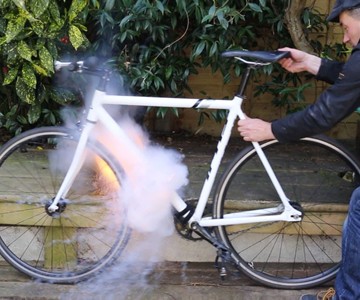 $71
from Kickstarter »
Check It Out

Bike Mine is a thing that makes you go boommm! At least if you're a dirty thief trying to make off with a dude's bicycle or motorcycle (or boat or jet ski if you live the kind of high rollin' life where that's a risk.) Inventor Yannick Read touts his new anti-theft device as the world's loudest alarm. When tripped, Bike Mine detonates a 150db blast of noise, which Read believes is the level at which any crook will be jolted into wishing he'd worn his brown pants to complete the heist.

It's also loud enough--and different enough from the wolf-crying car alarms that go off at the touch of falling leaves--to draw legit attention from passersby, and possibly even you as owner, depending on your proximity to your wheels.

Here are a couple of (muted) GIFs of what the Bike Mine looks like when tripped on a motorcycle and a bicycle .

Adding to its Data-from-Goonies charm is the Bike Mine's low-tech simplicity: Read makes the alarm from a length of titanium wire, a spring-loaded trap, and a small detonator, all protected by steel plates and covered in a rubber skin so they won't damage your property when they blow.

His detonator is a replaceable saluting blank, so named for its common use during special events--Royal birthdays, military ceremonies, religious festivals. Read notes these are safe to use if installed properly, and points out that he demos tripping the Bike Mine in his video without any special safety equipment.

If you want to read more, or pledge to get your hands on this hands-off tool, head over to the Bike Mine Kickstarter page by June 24, 2016.