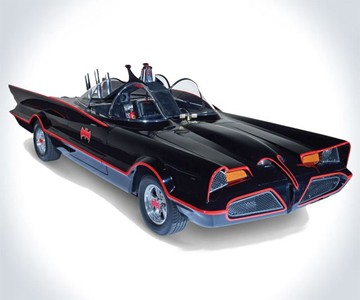 $200k
from Hammacher Schlemmer »
Check It Out

What stands between you and the driver's seat of a precise, officially-licensed roadworthy replica of the 1966 Batmobile? One year and a few zeros, my friend. The most iconic of all the Dark Knight's transportation iterations, this authentic super(hero)car contains all the pimpness original creator George Barris imagined almost 50 years ago, plus the additional mackness the technology of the 21st century now allows.

The cruiser is built on a custom Lincoln chassis housing a 430-horsepower, 383 Blueprint Crate engine and a Monster TH350 automatic transmission. (Uh, what? Batman and I are elite heterosexual males; we drive a stick.) Atomic batteries and turbines didn't make the cut, but their visual effects managed to avoid sacrifice thanks to a rear-facing propane tank that blasts afterburner flames.

Adam West--presuming he's still alive and stuff--will also recognize the '66 Batmobile replica's cockpit, whose TV series gadgetry includes a blinking Batphone, switch-operated electric actuators that open the hood and trunk, and a rotating red beacon. Some non-functional accessories, such as a glowing detect-a-scope screen, a Batbeam ray that raises from a hood-mounted antenna, and empty rear parachute packs, were added to max out the car's aesthetic awesomeness.

Since this Batmobile is street-legal, some safety features have been incorporated. Clamp-on side-view mirrors. A rear video camera. Doors that open and close. Check out the 1966 Batmobile's fabrication process, as well as the finished product in action, here.