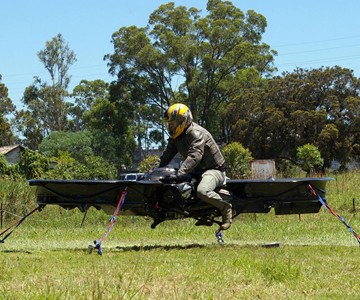 $50k
from Hoverbike »
Check It Out

The Hoverbike is what happens when one really wants to be a superhero, but really needs to figure out a way to more efficiently herd cattle. Aussie Chris Malloy has created a prototype for this motorcycle-helicopter hybrid, with the functional goals of revolutionizing aerial cattle mustering, assisting search and rescue operations, and improving military/emergency services; and the aesthetic goal of creating the undisputed King of Vehicular BAMFs.

The Hoverbike is still in trial phases, and there is currently only one physical manifestation of the propellered wonder. Once he is able to release them en masse, Malloy anticipates costs at around $50,000, but much additional funding is still required for research and testing before the company can become a PayPal vendor. This is good news for you. In the interim, Malloy is looking for backers, and as an incentive, he's going to give away the Hoverbike prototype to the most deserving little boy or girl who has donated to his cause once he reaches the approximately $1.2 million needed for project completion. So far, he has about $75,000.

The Hoverbike is powered by a flat-twin 4-stroke engine, and runs on regular unleaded fuel. Its right hand throttle, just like a motorcycle's, increases thrust and prompts liftoff. Liftoff. As in from earth to air, where you can then chill like David Blaine, fly forward, roll left and right with handlebar guides, or continue ascending. For upwards of 10,000 feet. Plenty high enough to exact revenge on all of the pigeons--and people--who have shit on you throughout life.

At first glance, flying a Hoverbike seems synonymous with playing a game of chicken with Death. However, Malloy assures us the simplistic design works in its favor, and many of the chopper lite's components are triple redundant--if one fails, at least two others must fail as well before you are faced with a serious airborne catastrophe. Riders also have the option of suiting up with an emergency parachute, and the bike has two explosive chutes attached to its airframe.

Now, the answer to the question on all Americans' minds: Can fat people ride the Hoverbike? Yes. The Hoverbike can withstand weights of up to 286 pounds for 45 minutes of flight time. However, to quote Malloy, "Like everything, it's a tradeoff--more weight means less fuel and stability." Obese, wobbly, and low on fuel in midair doesn't sound like a combination I'd want to mess around with, but to each his own.

For more factoids and bits of data on this awe-inspiring mutant of flight, check out the Hoverbike site's technical specs and FAQs.