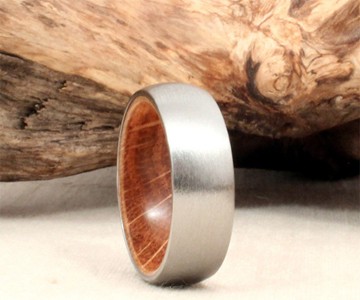 I guess I've been in a serious relationship with Jack Daniels for long enough now that I'm willing to don his ring and announce it to the world. Especially a ring as slick as this one. Check out the genuine used JD white oak barrel interior surrounded by 6al-4v grade 5 titanium. I may be afraid of commitment, but at least my phobia will be somewhat tempered by his good taste and deep pockets, which I will likely bleed dry as I continue to dick around on the Internet for the rest of my life, taking breaks every now and again to do a few pullups and delt raises, and shoot the shit with hot cougars in asserific spandex at my gym. Yeaaahhh. I may be getting the ring, but Jack Daniels is getting the prize.

From Milwaukee's Wedgewood Rings comes the Jack Daniels Whiskey Barrel especiale, available in stone, sandblasted, and polished finishes, and lined with the reclaimed American White Oak that once aged everyone's favorite vice from the south. One downside to the rings: due to their finishing techniques, the whiskey odors that permeate JD's barrels have been sealed inside. Bummer. Though I guess not reeking of whiskey everywhere you go while wearing the ring has its advantages too.

All rings include a Jack Daniels Whiskey barrel certificate of authenticity. Sizes run 4 to 16, and include quarter sizes. Please note that titanium rings cannot be resized after initial fabrication, so don't F up your measurements or order the rings after too many shots of Jack make the 6 and the 8 on your keyboard look the same.

UPDATE: On November 28, 2012, Wedgewood Rings released a second Jack Daniels Whiskey Barrel ring design, this one called the Pinstripe, due to its white oak strip running the length of the exterior center of the ring, and 0.5mm solid sterling silver inlaid on either side. The Pinstripe runs $265.

Muchas danke to Manny for the product suggestion.

Be still, my heart, and holy EDStriga, Batman! This is one fine looking pocket knife. Stubby and thicc in all the right places, the Striga Pocket Knife is a Maciej Modrzejewski design, coming soon to his online store...

The Dweller-Ti Wood Stove is a lightweight outdoor fireplace made of TA1 titanium and high temperature refractory glass. It combines the forces of Pomoly and Green Stove to produce a wood burner for hot tent and winter...

Design The Everything isn't messing around with The "Not For Climbing" Titanium Carabiner. Neither in their nifty spring-free, pin-free design that uses flexure to open, close, and bounce the carabiner back to its original...

I'd call the Tungsten Sphere a desktop toy, but given its high density - at just about 2" in diameter the sphere weighs over 3 pounds - I'm not sure how much fiddling or stress-relieving palm rolls you'll be able to do...