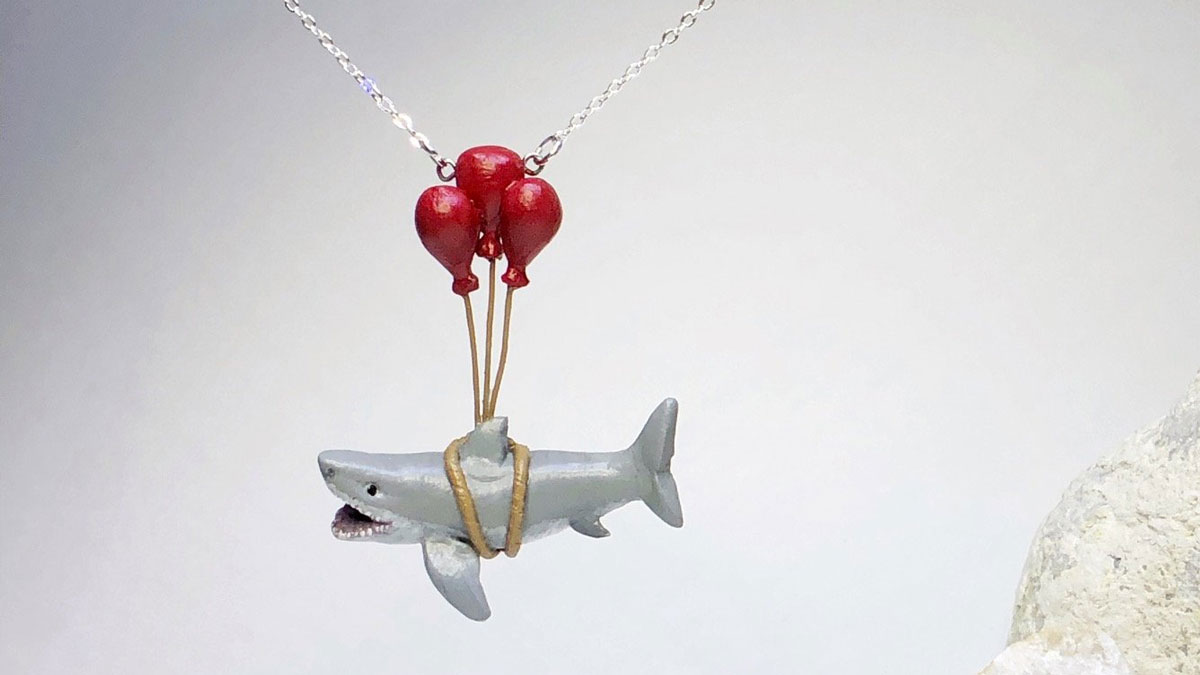 The Shark Learns to Fly Necklace isn't artist Teresa Chadwick's first time at the Whimsical Clay Rodeo. I first saw her Etsy shop, Curious Burrow, about 6 years ago when she won me over with her Sloth Rings. I hadn't even met my She-Ra: Princess of Power at that time, but I still bought one of the rings knowing that when the right girl came along, a sloth for her finger she would have as a symbol of my love.

Ahhh, that sloth is probably why I'm married now (for better or worse). And it just so happens my anniversary is coming up. So how do I buy my wife an anniversary gift that tops a Sloth Ring?

The pendant is a delightful depiction of a great white shark harnessed to a trio of red balloons, both of which will dangle from a silver chain. You'd think the shark would be none too happy about his transfer from water to air, but the expression on his face looks less like an I'm-gonna-eat-you-limb-by-limb and more like a Weeeeeeeee!

Still, if you're not convinced of the shark's good nature as he learns to fly, and the red balloons carrying him remind you of your own blood, Chadwick is happy to make them in another color of your choosing.

This shark won't take a bite out of your leg, but get too close and he'll probably lick and hump it. How clever. A shark life preserver for your pooch. He might hate wearing it, but the full-body flotation vest will keep...

Though most people would probably rather get burnt by the sun than bitten by a shark, both injuries are pretty bad these days. Take your pick on which one leads to a slow, tortuous death, or having flesh ripped away from...

Land shark! Or at least the scariest part of the shark now available to tear into human flesh on land. Dane Kealoha's shark tooth weapons style themselves after traditional blades and blunt implements with walloping power...