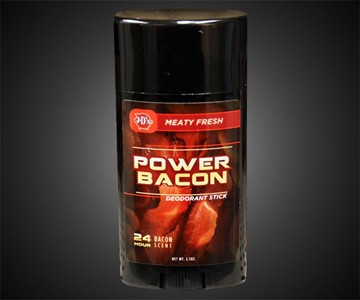 Everyone knows that pigs don't sweat. But if they did, they would smell like Power Bacon. And now too so can you. Just be sure to apply the deodorant with caution. Because while obviously nothing attracts the favor of a lady like the succulent scent of sizzling swine, the same aroma exposed to the public will also likely draw in every hound dog, raccoon, rogue sewer gator, and Fatty McFatterson in the neighborhood. An unfortunate side effect further amplified by the fact that, like any underarm protectant worth its salt (and grease), Power Bacon is calibrated to serve faithfully for 24 hours per application.

PS: Men looking to really spruce up their privates for, er, porking time can achieve the supreme 1-2 punch of irresistibility by using J&D's Power Bacon deodorant in conjunction with a box of J&D's bacon condoms.

PPS: Many thanks to FOX29 News for that screen shot. Now I will always remember that the year the worst typhoon in history hit the Philippines is also the year that Power Bacon deodorant hit the free market.