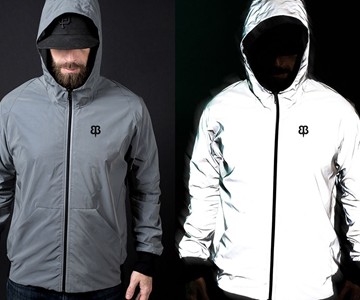 If you ride the flip side of taking hourly (quarter hourly? every 5-minute-ly?) selfies to Tweet and post on Instagram, and tend instead to wear you hood up and cap low, shielding your face when them camera comes out, Chris Holmes' Flashback Photobomber Hoodie might be your long-awaited Belfie equivalent. The highly reflective zip-up throws camera flashes back in their lenses' face, masking the hoodie wearer, and all but ruining the resultant photo.

DJ Chris Holmes came up with this idea, intended largely to thwart the paparazzi, but equally useful for simply F'ing up others' pictures, while he was on tour with Paul McCartney. Wearing reflective clothing himself to some of their performances, he was disappointed to see the photos from them obscured due to the effect of the flash bouncing off of his garments' fabric. Happily for Holmes, the silver lining to marred proof of sharing a stage with a Beatle was the possibility of using this reflective concept to deter unwanted attention from the paparazzi.

Flashback Photobomber Hoodie fabric is coated with "gazillions" of glass nanospheres activated by camera flashes. According the Holmes, the zip-ups are "perfect for anyone who doesn't want his or her picture taken, or for photobombers who really want to make a lasting impression." Sold by Betabrand, the hoodie recently completed a successful crowdfunding campaign and is now available to pre-order in sizes XS through XXXL, with shipment slated for August 2015.