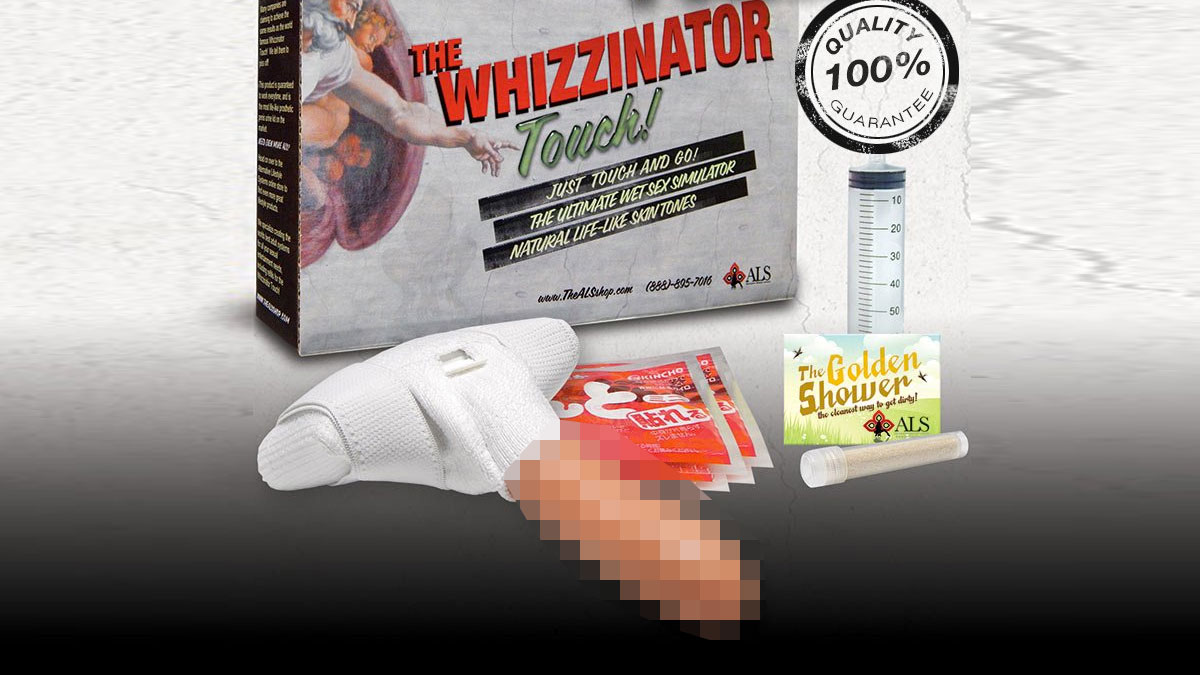 $129.95
from Alternative Lifestyle Products »
Check It Out

Whoa, I thought. Briscoe had a client use a fake penis to fake a drug screen? More importantly, they make fake penises for faking drug screens?! And they're called "Whizzinators?!" You don't gotta be a whizzard to know what the next thing I Googled was.

A second later, I was delighted to find the Whizzinator both exists, and is available for online purchase.

And a few seconds after that, I was doubly delighted to learn the Whizzinator Touch serves the dual purpose of beating drug tests and beating your meat to the tune of a golden shower, plus other urine-enhanced sexual activities. Holy crap! ... I mean holy piss!

Whizzinator whizzes make a Whizzinator Touch for the 5 most common shades of penis out there. In addition to what they call "the most life-like realistic fake penis on the market!" Whizzinator kits come with a Golden Shower Synthetic Urine sample. This medical grade synthetic urine contains ingredients found in natural urine, including uric acid and creatine. It is also balanced for specific gravity and Ph.

And - get ready for your favorite part - Golden Shower Synthetic Urine foams and smells the same as the real thing! Oh, oh, I wonder if it comes in an Ate Asparagus for Dinner scent.

Also included in the Whizzinator Touch kit are a cotton elastic belt with pressure band and refillable vinyl pouch with non-spill refill port to create a steady stream when it's pee time. Creators say this delivery system has an ultra-quiet flow that is easy to use, and operable with only one hand. For some dudes, that might be even better than the real thing!

The Whizzinator Touch's final move to keep it real comes via the kit's set of 4 heat pads, which Whizz wearers can use to heat their fake pee up to body temperature, and keep it at a perfect 98.6 degrees for 8 hours. All single use components of the Whizzinator Touch kit are replaceable as refills, sold individually through the website.

So what'll it be, dudes? Volcano your brains out before the drug test at work on Monday, and Whizzinator your penis through it, or make a new Tinder profile seeking fellow urinenthusiasts looking for some (totally safe and sterile) bedwetting fun?

The Tinkle Belle - Device for Ladies to Stand & Pee

It appears the Tinkle Belle, a urination device ladies can use to stand (and stay fully clothed!) and pee, was developed for hiking and camping, maybe porta-potty use at festivals and sporting events. But I say, if you...

Ah, there it is. The Urinal-Sink. The way I've been searching for to take a leak and wash my hands at the same time. Peeing while sanitizing. Or maybe peeing followed immediately, instantly by sanitizing, unless the Urinal-Sink...

This one's for the ladies! The Kula Cloth looks like a potholder, and indeed has highly absorptive powers, but in this case the camping and hiking companion isn't sucking up heat, it's sucking up pee. The Kula Cloth is...