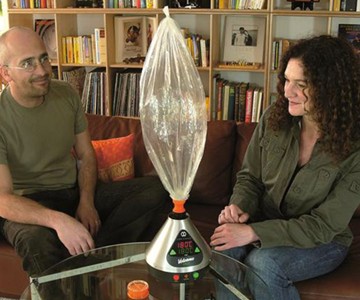 The Volcano base is made of a stainless steel cover that protects its internal steel clad ceramic heating element, aluminum alloy heat exchanger, and air pump. This listing shows the Volcano Classic (versus the Volcano Digit, which has a slightly more dynamic digital display). The machine has a manual heat dial that adjusts the temperature of air output from 266 to 446 degrees F, with a plus or minus 5-degree accuracy. It comes with an Easy Valve starter pack, a set of (reusable) Polythene balloons that have been preassembled and sealed with orange valves. The valves simply slip and lock on top of the heated Volcano for aromatic filling. Once removed, the valves stay locked until your lips press against their mouthpiece to release and inhale the goods inside. Take your mouth away, and the cap automatically re-locks for 100% waste-free puff-puff-passes.

The Volcano's power and precision produce strong, smooth, low-odor tokes. You'll also likely go through way less product per session than you normally would thanks to its efficiency and advanced extraction capabilities.

What you'll go through way more of, though, is dollars to get a Volcano.

Good thing there are a lot of rich stoners out there because the Volcano is not cheap. If you're really, really into weed, or using it for medicinal purposes, I guess you could consider the Volcano an investment. Like NFL season tickets or a college education. Everyone else, including me, will just have to wait for a less expensive vaporizer of the same caliber to come out. Or splurge on the Volcano for a party and charge our friends a buck a hit.

That'll be two bucks for you, Cornelius!

He ate the rest of my Bagel Bites.