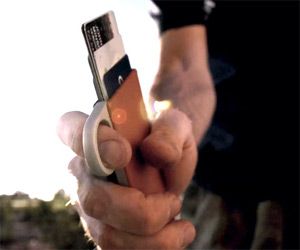 BJ Minson and Dan Loveridge, like 50% of the population, are men. Men who were tired of having more than one bulge in their pants. They found standard wallets "bulky, cluttered and unnecessary", as well as easily worn, ugly, and sucky at protecting against RFID skimming. And since these men weren't quite ready to give up credit cards and money, they decided to craft a better way to carry the two. The result, their Flip n'Grip Wallet, is a thin, simple, indestructible beaut CNC-machined from aircraft grade 7075 T6 Aluminum, with a functional finger loop and nifty release mechanism that pops out up to 6 cards in tidy staircase fashion.

The Flip. The Flip n'Grip's handy finger loop allows for a tight handhold to the percentage of net worth users carry on their person, as well as provides hours and hours of cumulative entertainment or nervous energy abatement for users who like twirling things around their fingers. Circus-like tricks and acrobatics are likely to ensue.

The Grip. No more frustrating fat- and/or greasy-fingered missions to retrieve cards from wallet slots that seem to be hermetically sealed. Likewise, no more cards (and compromising photos) flying everywhere when opening an old, brokedown wallet. The Flip n'Grip's grip is an intuitive, no-fail card holder--and deliverer. A squeeze of the sides pops up 6 cards in a symmetric stair-step pattern for easy access and return. A self-locking mechanism holds them in place when not in use.

The Extras. Flip n'Grip wallets are completely waterproof for accidental trips through the washing machine or yard irrigation sprinkler system, and won't rust or corrode. As evidenced in the photo of the wallet underneath a car tire, they also appear to be indestructible. Their composition--100% metallic components--adds a final perk: Flip n'Grips can block all RFID skimmers (Radio Frequency Identification tools shady characters use to scan people's credit cards from afar and make off with their personal information.)

The Flip n'Grip runs as Kickstarter project a through December 16, 2012, with anticipated delivery to backers in April 2013. $99 returns one, light gray, anodized wallet; for an additional $15, backers can select a choice of colors. At the $119 and $134 pledge levels, a money clip is added to the back of either the light gray or colored Flip n'Grip.

November 2013 Update: Flip n'Grip funding was unsuccessful, and at present it does not appear that its creators have proceeded with producing the wallet for the public.

Whether it's in water, snow, sweat, or bulk wrestling Jello, the Submerge waterproof wallet and cardholder lets you do just that. Submerge. Without worrying your cash, cards, keys, and other small EDC will follow the...

Is this what they mean by hiding something in plain sight? The Million Dollar Cube Money Table is an 18" x 18" x 18" decorative side or end table that looks like a pile of neatly stacked hundos. It's totally fake. ...

Money, money, money, mooooneyyyy! Dango introduces the MC01 Titanium Money Clip for dudes who aren't into urban traveling light with just a few cards and a slim front pocket wallet. Dudes who don't care that cash is a...