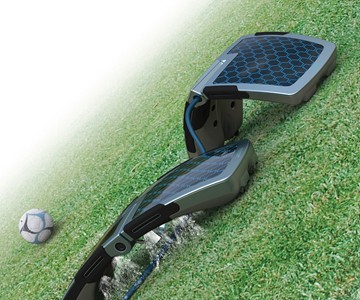 Blake Johnson developed the Naiad Lawn Watering Robot concept in 2009, when he was an industrial design student asked to "Identify a problem in yard care and design a product to solve the problem." In his research Johnson found that an estimated 30% of water from misting sprinkler systems is lost to evaporation or overspray. So he made a robot to reel in the waste. And also to look rad inchworm-ing through the grass, tending to its needs.

Naiad the Lawn Watering Robot would (theoretically, given it's still just a school project) hook up to your garden hose and traverse your lawn autonomously, releasing the minimum amount of water necessary to keep your grass green and well-fed. To establish the Naiad's territory, you would place proximity sensors around your yard's perimeter. To tell the robot when to make its rounds, you would set a watering schedule in its WiFi-enabled base, the latter of which would also house your garden hose.

So as not to consume back most of the energy he's trying to save, Johnson also gave his watering buddy a solar-powered walk. Panels line the top of the Naiad, and when set out in the sun prior to use, absorb enough power to propel him around the yard.

For further technical details and progress photos, head over to Johnson's Naiad project page on Behance.

Like the idea of a robot watering your lawn? How about this one that mows elaborate messages and graphics into it?

The leaves may not be falling yet, but look at them up there. All green and wispy, shaking their golden ratioed little asses in the wind. They're just biding their time. Waiting for a few brisk nights. A random September...

Ooh, get part lawnmower, part Back to the Future with Sun Joe's Electric Hover Mower. The plug-in grass barber's 10-amp motor spins at up to 7,000 RPM, creating a cushion of air, and its namesake hover effect. Look, Ma!...

When I bite into a juicy cheeseburger, the last thing I expect - or want - is for streams of water to spurt out. I mean, normally. But a water-spraying Cheeseburger Sprinkler, now, that's a different story...

Now this is the kind of coiled, hissing, spitting cobra I like. The kind that coils attentively near my sweating brow, and hisses and spits a cool and continuous mist of water my way. Orbit's Flex Cobra Portable Mist...

It's gonna be tough to schlep this garden gnome around the world with you for photo ops, but I'll bet if you do the 8-1/2-foot lawn ornament will help your Instagram account go viral. Who wouldn't want to follow Gottfried...

14 Ways to Turn an Interior Room Into an Outdoor Oasis

Winter weather. Pandemic. High-rise urban apartment building. Housing shortage. Correction, affordable housing shortage. These are just a few of the reasons I decided to brainstorm some ways to turn an interior room into...

Your kid in a boxing fight versus a giant kangaroo. Now that sounds like a losing battle. BigMouth Toys has even given their kangaroo - Kangaroo Jack - a pair of boxing gloves and the ability to shoot a 360-degree spinning...

The GrowCube is an automatic drip irrigation system that waters your houseplants while you're away, or when you just don't have the time or inclination to do it by hand. It's not a new idea - you can find several iterations...

Don't worry, dog owners. Dog Grass isn't that kind of grass for dogs. It's not even the Dad Grass hemp CBD kind of grass. And it isn't a cutesy kit with a dog theme for growing your own weed. Dare I say, at least for...