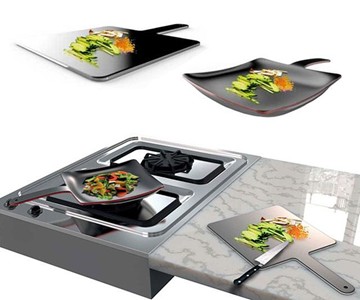 Right now Juan Lee's Curling Pan is just a concept. A wicked concept that Juan better make happen because a cutting board that curls up into a frying pan when it hits the heat of a stovetop burner? Holy balls that's some Einstein-abracadabra-Shazam, son! awesomeness. Brilliant. Someone give this kid a pile of seed money.

When cool, the Curling Pan lies flat as a standard cutting board for chopping whatever ingredients you would otherwise drop all over the floor during their transfer to a cooking surface. Use it to dice vegetables, slice meat, and compile the base of your dish, and then set the entire board on a burner, shaking your head at the marvels of human ingenuity as its edges curl upward and form a frying pan when they absorb the heat.

The piece of cookware achieves this effect from a shape-memory alloy material composition. The metal nitinol has the ability to remember and morph between two entirely different "pre-programmed" shapes. One shape rules below certain temperatures, while the other takes over above them. You may have seen something similar in the past--nitinol is the same metal used in magicians' self-bending paperclips and silverware. In addition to shapeshifting, the Curling Pan also changes color, from white to yellow to red, as it heats up to provide further indication of the rise in temperature.

On top of being rad...just...rad as a single dish for constructing certain meals, the Curling Pan also saves space by returning to and storing flat when cool. Lee's invention recently won a 2013 Best of the Best Red Dot Award, and is featured on student-based design idea site Behance. I'll say it again: someone give this kid a pile of seed money.

Open wide, and get ready for a big bite of...cast iron. Or maybe it's aluminum on the menu for you tonight, pizza pan and skillet gripper. Made by Chef Pomodoro, the Pizza Pan Gripper is a wrench-style tool made to help...

Aaarrrggghhh! I don't have anything to say about a collapsible colander and cutting board combo! I'm only running it at all because my mama swears it is a handy thing to have for a New Year's Eve get together, or any...

What the point of a Pizza Slice Serving Board is I definitely do not know. It's essentially a round cutting board cut into 6 pizza-shaped "slices," each with a handle on the end so everyone can pull out one of the personal...

Even if your kitchen crusades consist of little more than scrambling eggs or, like my dad, changing other men's lives by showing them how to use a skillet to reheat day-old pizza to its just-delivered splendor, the Fi

Yes, please, I want a Taking Sides Couple's Snack Tray. My wife, She-Ra: Princess of Power is always stealing my food. And my wine, beer, and cocktails when she invariably sucks hers down first...

"Mezzaluna" is a fancy Italian word for "half moon," an apt description for the semi-circular blade in this rocking knife for chopping herbs and mincing garlic in the kitchen. And "Jean Patrique" is a fancy French word...

Two coolers, folding prep surface, wine rack and drawer storage, rustic wood design--this patio bar gets my gold star of approval. Which it obviously already knows, given that it's gone ahead and affixed one to itself...