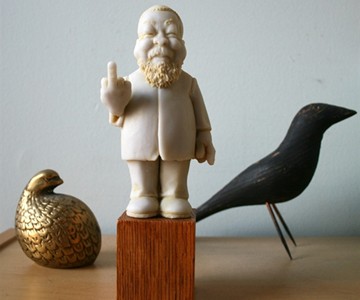 Chinese artist and political activist Ai Weiwei flips the bird not to you and me (though he might if he knew us, 'ey?) but to public monuments. The White House. Tiananmen Square. King's Landing. In 2011, the Chinese government incarcerated Ai--first for unexplained reasons, and then on "tax charges"--further fueling his desire to speak out, and spawning the 2012 documentary Ai Weiwei: Never Sorry. Ai Weiwei has since risen to international recognition as a poster child for free speech and artistic expression. In October of 2011 ArtReview magazine charted him #1 in their annual Power 100 list.

The statue so prominently displaying his formidable middle finger is entitled "1/1,000,000,000"--the percentage of China's population Ai represents--and references a photo series the artist released depicting himself giving a tall man thumbs up to the aforementioned monuments. With the exception of King's Landing. I was kidding about that one. When Ai went there he actually kicked Joffrey Baratheon in the nuts.

The Ai Weiwei "1/1,000,000,000" statue is cast marble affixed to an oak base, the latter of which has been signed and numbered by its own artist, Elliott Arkin. A limited edition of 100 figurines are available, with a portion of proceeds from their sale going to Amnesty International.

The Cement Penis Garden Statue is real. It's spectacular. And, at 16" long, it's porn-star-size. Which I guess is bad news if you were hoping to make a truly gargantuan, say, 6' long dick your newest garden statue, along...

If Jaime Lannister had an illicit incestual affair with Tyrion instead of Cersei, I think these Knight Gnome Garden Statues are pretty good representations of how their kids would turn out. Tiny but fierce warriors who...

It's gonna be tough to schlep this garden gnome around the world with you for photo ops, but I'll bet if you do the 8-1/2-foot lawn ornament will help your Instagram account go viral. Who wouldn't want to follow Gottfried...