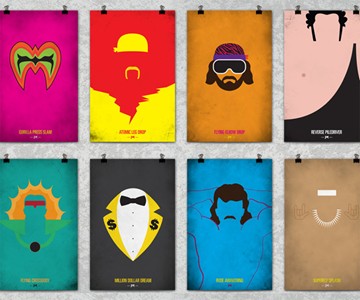 The subject matter: 80s and 90s WWF legends. Wrestlers who earned their status through killer showmanship, illustrative identities, and annihilatory moves that, 20+ years later, make them recognizable by little more than their trademark costume colors, accessories, or facial hair. New York designer Bernie Gross gives a nod to old-school WWF branding, and the larger-than-life personalities that emerged from it, in his WWF Legends Minimalist Posters.

Posters condense their subjects' personas into telltale hues, symbolic physical characteristics, or props, plus the one lights-out maneuver each wrestler honed as his personal pummeling stamp. Brutus the Barber Beefcake's garden shears and sleeper hold. Andre the Giant's single-strapped suit and reverse piledriver. The Undertaker's...actually, screw you, Undertaker.

No, no reason. I just wanted to say that publicly, but from the safe confines of my living room.

WWF icon posters are sold individually for $20, or as a 12-meathead set for $200. They measure 11" x 17" apiece, and are printed with archival inks on 100lb uncoated cover stock. Should anyone wish to have a life-size 2D incarnation of Ravishing Rick Rude to hang, say, in the window facing the uppity neighbor's bedroom, Gross will gladly fill orders for custom sizes at an additional fee. The complete cast of minimalist WWF prints, and their signature moves, includes: