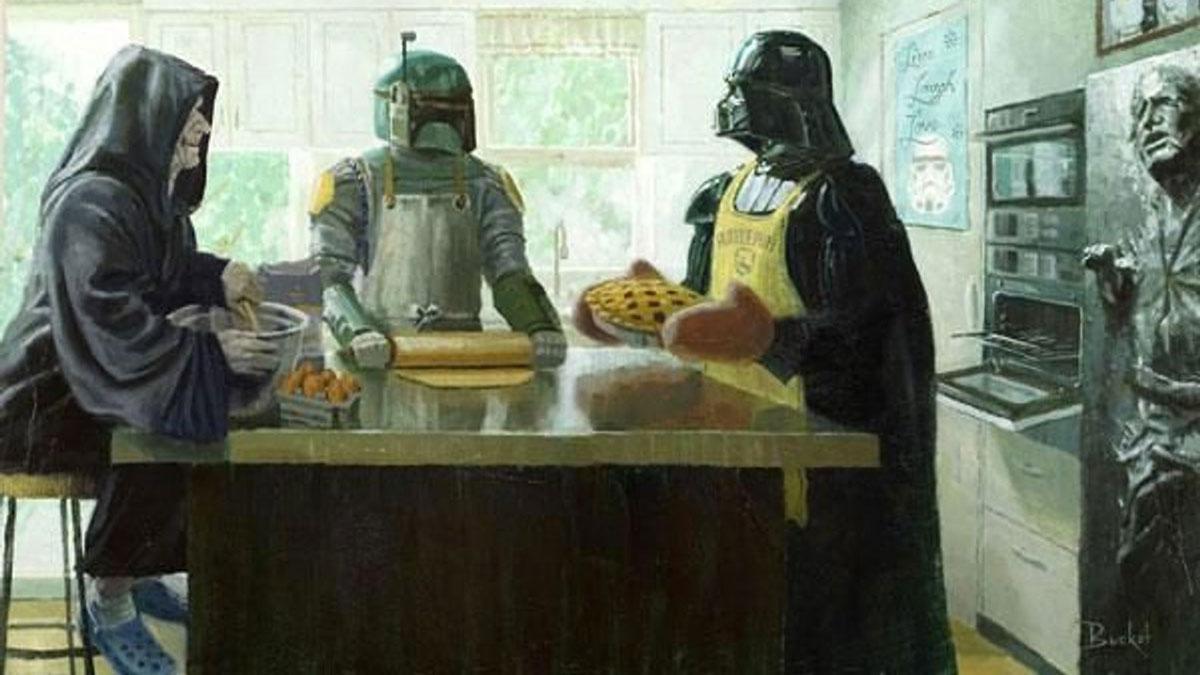 Artists Bucket Art and Ashley Raine aren't the first Star Wars smarty pants to parody the franchise and immortalize characters ranging from Darth Vader and Stormtroopers to Chewbacca and R2-D2 in pieces of offbeat - and often compromising - art. Jeffrey Brown wrote a whole children's book series doing just that - remember Darth Vader and Son? More recently, we violated the Dark Lord's privacy in the name of a Punderdome-worthy print: Vader sitting on the john with the caption, "Use The Force."

What makes these Star Wars parody prints stand out to me is their more classic artistic style, and the everyday tasks their artists have chosen for their galactic subjects to engage in.

Imperial Baking Party gathers Darth Vader, Boba Fett, and The Emperor in the kitchen to collaborate on some lattice-topped fruit pies. Check out the last guy's footwear. And don't forget the fridge.

One of the Imperial Pupper prints shows us a poor AT-AT stuck inside at his owner's bay window, longing for access to the Stormtrooper mailman making his delivery at the curb.

A Mandalorian and The Hangover mashup bemusingly depicts a Stormtrooper and Mando in an elevator, the latter with Baby Yoda strapped to him in a front carrier.

The Star Wars parody art prints are all ridiculous within the context of our beloved Star Wars characters' personalities and lives, but also somehow fitting for us in our current times. Not to mention altogether charming, and terrific Star Wars gifts for franchise fans.

Muchas danke to Geeks Are Sexy.

What a piece of junk! Actually, I have no idea how well this Star Wars Millennium Falcon Wireless Charge Pad works, or how cool (or junky) it looks in person, but that felt like the right line from the film series to...