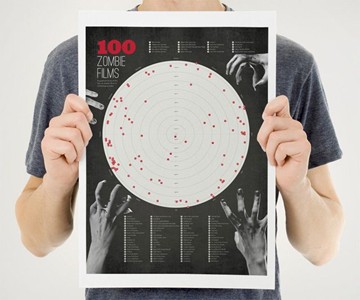 Ryan McArthur has compiled a graphical study of the Top 100 Zombie films in order of how much they pale in comparison to Zombieland and, for that matter, any movie in which Bill Murray has ever appeared, including that Rushmore nonsense, which I thought was terrible, just terrible on account of the fact that I didn't get it.

Yeah, OK. The zombie flicks are in chronological order and separated by decade, not ranked qualitatively. McArthur didn't want to take on that job and get stuck fending off the vitriol he'd get slung at him as a result of his choices. I, however, savor the venom of people who disagree with me and who I offend by declaring subjective statements as absolutes, and so am happy to report that Zombieland is #1, Pet Sematary is #2, and none of the F'ing Resident Evils are even making the list. Suck it, Milla Jovovich. Your place is in the Blue Lagoon. Also, every single Beatles song sounds exactly the same, cosplay is for losers, The Hunger Games series is better than any book ever written about the Holocaust, and people who eat Taco Bell should be denied health insurance.

100 Zombie Films - A Graphical Study wall art measures 13" x 17" and is printed on Archival matte paper with a basis weight of 240gsm.

A Visual Learner's Guide to Being a Grown-Up