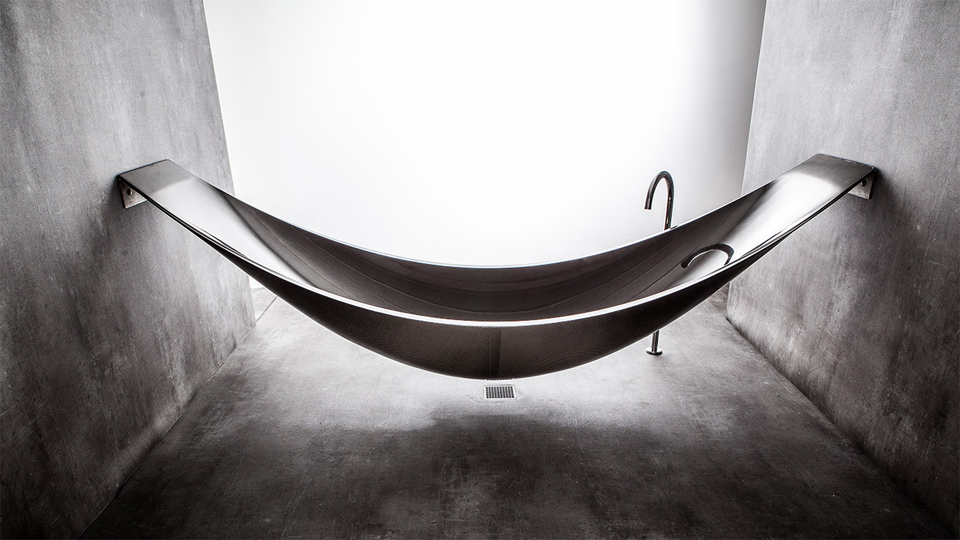 Usually when people describe themselves they inflate the truth or do that reverse psychology trick where they say a bunch of self-deprecating things in an effort to convey the opposite meaning. In both cases they would like everyone to believe they are awesome. But when Splinterworks, creators of this carbon fiber hammock bathtub named Vessel, terms themselves designers of "sculptural furniture that is engaging and inspiring" and suggests pieces forged at their hands will "enrich the lives" of those who use them, I don't see an ounce of exaggeration at work. To me, the Vessel looks to be the Supreme Mac Daddy of wash basins. The Jay-Z of bathtubs. It could start a bathtub empire, which it would then segue into a professional athlete representation agency and KD would be all, "Grateful for this opportunity with Carbon Fiber Hammock Sports."

Vessel isn't even the first carbon fiber bathtub we've seen, but its compelling shape, conjuring the notion of an especially relaxing activity layered upon an especially relaxing activity - a double shot of relaxation! - certainly makes it the most memorable. Part of a limited edition, the tub's cost is still TBA, but I'd estimate an eventual asking price in the high 5, maybe low 6 figures. How about if everyone guesses a dollar amount in the Comments section, and whomever is closest - even if you go over - gets to buy me the tub?

Vessel suspends from surrounding walls from stainless steel brackets and should obviously be installed over a floor drain or a bunch of sleeping cats for emptying. Filling occurs via a freestanding tap on the floor. Inside the tub's carbon fiber shell is an insulating foam core so hot water stays hot long enough for a bath and post-cleansing sexy time.

Be Stillness my heart! Kohler's Stillness freestanding bath, a whole spa experience tucked into a trendy smart tub, won't be available until the end of March 2022, but I'm sure my wife - and yours - will accept an IOU...

What's this, diatomaceous earth, you're in bath mat form now? Are you trying to challenge activated charcoal for the title of Strangest Naturally Occurring Substance You Can Use for Pretty Much Everything?...

A dude in an Ice Barrel? A 100-gallon barrel filled with water and...ice? This photo is a still of a torture scene they're filming for some, like, Russian spy movie right? Gah! And I thought the Glacial Shower was a ridonkulous...