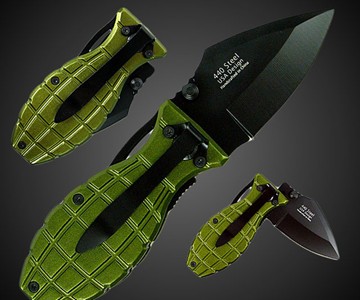 Using my keen search engine fingers--which can best be compared to a bloodhound's nose--to accommodate those of you who are tougher sells, I also found the following information about the grenade knife.

It's not that words haven't always been weapons, but this Pineapple Grenade Keyboard depicts how much easier, and deadlier, it is to use them as such today. The 25-key handheld typing companion is a fine manifestation...

This Dragon Collector's Knife is a dragon collector's knife in so many ways. Indeed, the intricate blade, hand-forged in the damascus style, and equally intricate hand-carved wood dragon holder make it a knife for both...