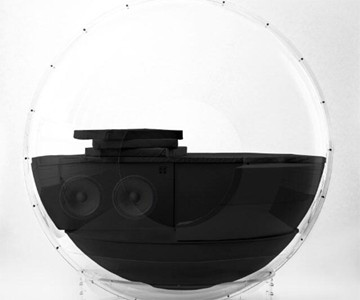 $15k
from indiegogo »
Check It Out

Remember the Cocoon 1, a means for people to leave the bubble of their computer screens and living rooms, and enter a bubble plopped down in the middle of a park or the general admission area of the next Slipknot show? Now Pjadad, the designer of the spherical personal space, has collaborated with soundsters ST to expand his public isolation concept to include audible as well as physical detachment. Their AudioOrbs are habitable speakers. Hollow globes filled with 18 mounted noise dispensers that provide "a rich and full audio spectrum" to the person relaxing inside.

AudioOrb speakers sub in for the Cocoon's storage modules, but the Tempur body-contouring lounge pillows stay put. The goal is to make occupants feel like they are floating. Physically removed from reality and fully immersed in sound. Wow. How wonderful. Though anyone who hangs out in there too long will probably suffer hearing damage and have to spend twice what they did on the AudioOrb on a cochlear implant. Oh well. Every yin has its yang.

AudioOrbs run as an Indiegogo crowdfunding project through February 28, 2014. Specifically, Pjadad and ST are looking for a crowd of 2 to fund their project. They will build 2 units for 2 bidders willing to shell out $15,000 apiece, and possibly no more ever again. So that's that.

GPods, self-described as the world's first earbuds with light control, could be simple earphones with red pill / blue pill-looking baubles that flash your favorite LED colors light one of those smart light bulbs, or a...

Welp, Splinterworks certainly doesn't call their wall-mounted bar cabinet "Dime" for its price tag. And though it may be appropriate to conclude that a purchase of the semi-spherical segmented spirits shelf would leave...