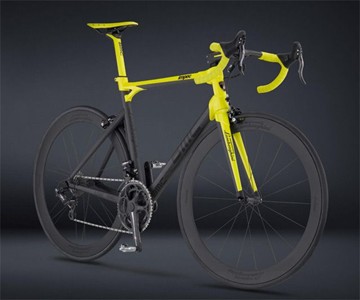 The 50th Anniversary Lamborghini Edition impec is the bike P. Diddy or Kanye West would buy if they took up cycling. Which is to say if they learned to ride a bicycle. Oh the comedy that would ensue the first time Puffy or World's Largest Ego arrived at an intersection and tried to unclip. Slowing...slowing...slowing...frantically trying to twist foot...slowing...experiencing no success...slowing...stop. Pause. Perfect, unavoidable, 90-degree lateral wiiipe out. The YouTube hits would be record-breaking. I bet Ludacris could dominate the road races though. It seems logical that a person who can move his mouth that fast could perform similar feats with his legs. Andre 3000 too. In fact, I'm pretty sure I've seen him tooling down the Venice Boardwalk on a paisley cruiser wearing a Pee-wee Herman cycling suit.

Swiss bike manufacturer BMC has teamed up with Italian car god Lamborghini to release a highly exclusive series of impec race bikes. Incorporating the high-performance handling, bullet-quick performance, and beastly svelte aesthetics of the Lambo, BMC's latest will see a made-to-order production run of only 50. impec framing derives from Italian-made carbon components, with Aventador flourishes, such as the car's leather serving as bar tape and saddle covering, capping the look. impecs weigh 15.1 pounds. For other specs visit BMC's website and try deciphering their Aztec cave symbols yourself. The trapezoid with a bar sticking out of the top is the only one I could figure out.

Despite Indian Motorcyle's best aesthetic efforts, the Indian eFTR Hooligan 1.2 e-Bike still looks more like a bicycle than a motorcycle, but hey. At least you don't need a license to ride one. You'll get a few other...

Do you want more from your bike? More from your tent? More, shall we say, uta, from the both? Then team them up and let the synergy flow with the Moruta Hogar 2P bike-incorporated tent...