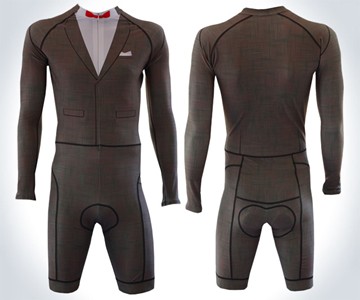 When I first heard about the Pee-wee Herman cycling suit I thought I had been proven wrong in my contention that nothing on earth could make cyclists look any more ridiculous than they already do. Seriously, does any sport have a worse uniform than professional (or, in the cases of most people who wear these getups, leisurely weekend in the middle of the road) cycling? I'd rather wear a dress than that neon-Lycra-plastered-with-ads crapola. At least then people would assume the outfit was a joke, not the person wearing it. (Don't worry, I promise this rant has a happy ending.) And the thought of dousing skinsuits with the slim-cut gray two-piece and red bowtie of the most irritating deviant on the planet? I figured just looking at it would spin me into a grand mal seizure.

But, Hey, hey, hey! guess what? The Pee-wee suit isn't that bad. It actually looks less obnoxious and insulting to nature than almost every other jersey and padded ass shorts combo I've seen in my day. And believe me, living in a city full of self-righteous bike commuters, I have seen my fair share. Peddler Podium Cycling waxes poetic on the skinsuit's humor element, but to me, road-racing Pee-wee is the classiest and most subdued polyester blend of bike garb on the market. Guys who ride Herman-ed out to work wouldn't even really need to change out of it, if not for the sweat and odor thing.

So if you've got to deck yourself out in a moisture-wicking body hugger that apprises every Tom, Dick, and hot chick at the espresso stand of exactly what size heat you're packing, go ahead and mecca lecca hi, mecca hiney ho a Pee-wee Herman skinsuit into your stash of cycling gear. See? Happy ending.

Not sure Matador Meggings are right for you, dudes? Not sure any leggings, even those designed especially for men and their anatomies, are masculine enough for a place on your legs and crotchal region? Well. Matador Meggings...