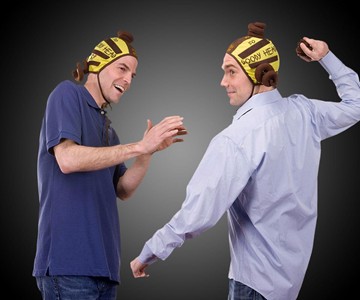 Box Contents: 2 Hats; 3 Doodies. In life we sling mud and we talk shit and also many animals with opposable thumbs literally throw their excrement, so...uh...it's only logical that someone created a party game wherein players wear Velcro caps and and chuck piles of poo at each other dodgeball style?

I wonder if the thrower is automatically out if his target catches the turd mid-air in Doody Head. I wonder if it's as much of an honor and panty dropper as it sounds to be crowned King Doody Head. I wonder why every BBQ I've been to this summer has insipid lawn games like Bocce and croquet instead of Doody Head poo-flinging fun. People are so boring and stuck up.

Doody Head caps are lined with sticky strips and pre-printed point scores for tracking who's #1 at firing off #2s. Amazon reviewers largely report sentiments of satisfaction with their Jumpin' Banana Doody Head purchases. (Not surprising, given the great satisfaction most people feel after releasing a doody.) Some notable comments:

Purchased this as a Birthday present for a teenage boy who is obsessed with anything that has to do with doo doo. He just loves doo doo - from fake doo that he leaves on beds to chocolate edible doo doo. So when I saw this it screamed out his name. Now he plays with his other 17 year-old buddies flinging doo doo at each others [sic] heads.

I did not mean to click "purchase" from my cell phone when viewing this item. But I did so I let it arrive figuring I'd regift it as a joke or just return it. But then it arrived and my daughter begged me to let her and her friend play it. It was hilarious! What's more, our dog decided to make a mad dash with the doody every time one hit the floor. We were laughing to tears. We agreed the game is a keeper.

My "inner child" loves a good game. [Doody Head] is a good game for those who are not hung up on maturity.

The Doody Head Poo Flinging Game is a top Dude Gift for a Teen and Novelty Gift pick.