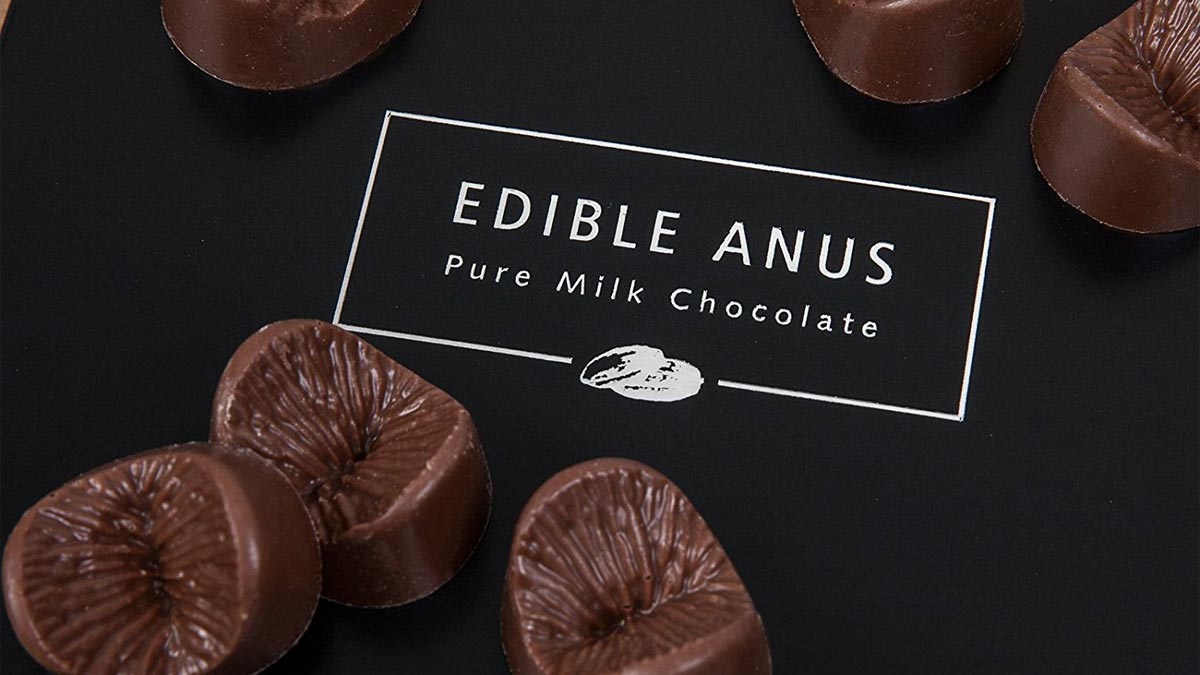 Several years ago, Willy Wonka sat down with the UK's most distinguished chocolatiers to lay down the next big release in artisan chocolate. He tried many of their stunning and revolutionary manipulations of the finest Belgian exports, and felt rejuvenated by the abundance of creativity and potential. However, none of their singular confectionery creations quite hit the mark on its own. Here is the story of how Edible Anus Chocolates were born.

Willy Wonka: Alright, guys, I think we're ready to select the first of the next big hits in the chocolate industry. By the way, my name is Willy Wonka. Yes, the Willy Wonka. And I gotta tell you: fellas...you have got what appears to be a dynamite grasp of the cacao bean!

Chocolatier 1: Wow. Coming from you, Willy, that means a lot.

Willy Wonka: Easy, guys...I put my pants on just like the rest of you--one leg at a time. Except, once my pants are on, I make chocolate rivers so smooth and delicious fat kids are willing to drown in them for a taste. Now let's get to business here. Show me what you got.

Chocolatiers lay before Willy Wonka a spread of rounded truffles, salted caramel logs, nougat-centered milk chocolates with tops spun like roses, and a solid, 85% dark confection shaped like an ass.

Willy Wonka: I'll be honest...fellas, these were tasting great. But...I could've used a little more anus. So...could you go back and tweak it a little, whip me up another batch with a few more?

Several rounds of tasting later. Wonka is fired up and maniacal.

Chocolatier 2: Willy, uh, I don't know. I mean, do you not think maybe a hunk of chocolate shaped like a butthole would maybe make people not want to eat it?

Willy Wonka: Actually, guys, guess what? I got a fever! And the only prescription is...more anus!

Edible Anus artisan, preservative-free Belgian chocolates are handmade in the UK. The company claims its brown star mold comes from a sphincter model whose trunk is as fine as the chocolates themselves. They believe their anus range of confections can "dissolve cultural boundaries of race, gender, class, and sexual orientation." Well. They can certainly dissolve cultural boundaries of not licking an asshole in public.

The 16 unique & quirky gifts are not one of a kind, but they're still unique in their ability to delight, excite, and stand out from the pile of gifts your favorite nephew will receive from all his other relatives, or...

With the Bellabooty Belt, you can "hip thrust anytime, anywhere!" And just like that, all your problems - maybe even all the world's problems - are solved!...

The official name of this chocolate covered scorpion is "Dessert Scorpion." Just in case there is any confusion about whether you should eat it for breakfast or as a snack or on a dare. And also to distinguish it from...

Stay organized...even if you're all thumbs with a set of Realistic Human Thumb Tacks from This Is Michie's Shop. The push pins are hand-sculpted from polymer clay, so no actual human thumbs were harmed in their making...

Koko Nuggz weed-themed treats are so fun, so poppable, and so full of sugar and Rice Krispie carbs that even without the THC they'll probably get you high. Or, according to the Koko Nuggz nugget bakers, at least "shock...