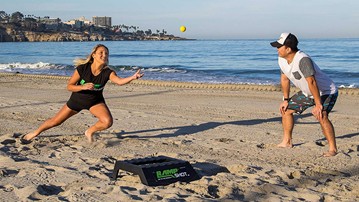 The casual athlete appreciates sporting goods for the goods they bring with them: good friends; good booze; good energy; and good times. My roundup of 17 sporting goods gifts for 2021 keeps these 4 goods in mind over all else.

Note: All 17 sporting goods gifts are priced as they were at printing on November 25, 2021. Pricing, and availability, are subject to change.

Get ready to maneuver through SpyderPong's web of mashups. The net-on-net table game from Franklin Sports combines elements of ping-pong, volleyball, and 4-square into a single competitive endeavor playable by up to 6 people at a time.

SpyderPong uses what appear to be standard table tennis paddles, but rather than little hard plastic balls, you'll bat around larger inflatable balls. Two sizes of them, in fact, as the set includes 2" and 4.5" SpyderPong balls. The smaller ball is a high-bouncer that pairs with the paddles for a twist on ping-pong, and the larger is a handball for playing SpyderPong's nod to volleyball and 4-square.

From the makers of Snowfeet ice-gliding shoe strap-ons, Skiskates are another type of ice skate for the ski slopes, but these connect to your ski boots. You could also think of them as "the shortest skis in the world!" which is the tagline their superlative-loving creators have gone with over the mistaken lyrics of Lil Jon & the East Side Boyz's "Get Low."

Put the pedal to the...water? A stand up pedal board? Sweet Jesus, as one of my favorite Twitter memes might ask, "What chapter of Revelation are we doing today?"

The Hobie Mirage Eclipse Dura 12.0 Stand Up Pedal Board throws half a scooter frame and some stair-stepper-style pedals on a stand up paddleboard to create a mashup the likes of which I haven't seen since Pringles-flavored instant ramen noodles.

Tipsy Elves, makers of the Rip 'N Sip Ski Suit, sells them with a warning: "Caution: These ski suits may cause hand fatigue from excessive high fives." But I disagree. Based on the snow onesie's nod to the paper cup print and nostalgia of the 90s it's modeled after, I'd replace the "excessive high fives" part with "rampant jazz hands."

After all, Jazz is the name of the jagged mess of teal and purple that weave around the now-iconic cups, and now the Rip 'N Sip Ski Suit it inspired.

Here's a Penny for your thoughts. My thoughts are that Penny Australia's Skateboards are pretty damn cool, made of waffled plastic decks Penny says makes them "the original and the best" for anyone who wants a simple, snazzy, and lightweight board in their collection.

Penny Skateboards arrive fully assembled, and come in 22", 27", 29", and 36" lengths. Choose from sleek, monotone boards, add contrasting pops of color to the wheels and trucks, or go for one of the design series Penny boards covered in flames, checkerboards, or an artist's design. A great gift for a teen this holiday season.

Look like a style icon riding your bike with this baseball hat bicycle helmet.

Haha, sike! You're still gonna look like a dork, but perhaps not the big ol' dork levels of dorkiness you would wearing a standard bicycle helmet. Not that that matters when it comes to cycling safety - you won't care what you look like if you end up dead, or brain dead, or

Is there a bigger buzzkill than thievery at the beach? DOCKsLOCKs is a SUP and surfboard lock system made to be a quick and easy way for surfers and paddle boarders to protect their precious cargo from theft. DOCKsLOCKs can connect multiple boards with a single cable, and secure them in a variety of places, from a tree, to a fence, to the rooftop of your car.

You don't just climb out of this swimming pool, you climb into it too. And I hope you're a good scrambler - or long jumper, or pole vaulter - because Intex's full size above ground pool doesn't come with a lot of other options. At least none that look too graceful or comfortable with that steel pipe frame making up its top edge and side supports.

The 32' x 16' above grounder does come with a removable ladder, but when you're on one end of the pool and it's on the other you know it's gonna be time to practice your Olympic mounts and dismounts, and Cirque du Soleil moves.

A little Hot Tub Time Machine mixed with a little 6-year-old you, and voila! Freezy Freakies retro color-changing mittens are back. Even better, these badass winter warmers of the 80s have grown with you, but in size only. The gloves feature the cold-activated images you remember from your childhood, only bigger. Big enough to fit man hands.

RampShot calls its backyard game - or beach game, or park game, or tailgate game - "cornhole on steroids," and I don't know if that intrigues or intimidates me. It was created to up the pace and excitement of sleepy cornhole with racquetball-style balls that bounce and fly off plastic ramps, or sink into attached nets for a 3-point score. RampShot is a 4-player game, and every turn 3 of the 4 players remain active to prevent gameplay from becoming more about standing around, getting drunk and dehydrated waiting for a turn, than participating.

Onyx's M-16 Belt Pack is a manual inflatable personal floatation device (PFD). It inflates via a tab marked "Jerk To Inflate." Ahhh, an instruction all of us, dudes and ladies alike, can understand and execute easily.

The M-16 Inflatable Belt Pack is US Coast Guard-approved for people 16 and up, weighing over 80 pounds. It comes with a 16-gram CO2 cartridge that provides 17 pounds of buoyancy upon activation. Once floating the wearer can use an oral inflation tube to add more buoyancy, up to 26.5 pounds.

My favorite thing about Reflective Clo's description of their Holographic Tracksuit is that one of the first things they call it "cozy." Like, nevermind that it's reflective to the point of being trippy, that it makes an oil-slick-rainbow explosion in everyone's face when hit with any type of light, the main takeaway here is that the Holographic Tracksuit is one motherfucking cozy tracksuit.

The Aerobie Sonic Fin Football sees the Wingball's 88MPH throwing speeds, and offers up its own feat of foam football strength: a pro-level throwing distance of up to 100 yards. You know, like, Russell Wilson-style.

And, oh hey there, Russell Wilson. The quarterback with the arm of gold and the offensive line of invisibility just so happens to be (Sea)hawking the Sonic Fin Football for Aerobie.

If you can't go to the ocean, bring the ocean to - well, OK, not really. Razor's RipSurf is a "surfboard" for dry land, a design the company says will allow riders to carve out and cut on concrete just like they would on waves.

Show off your slick tricks on an even slicker surface this winter with a Slopedeck Snowskate. The Canadian-made hybrid trades in snowboard bindings for a maple cambered deck that mimics a skateboard's in both size and feel. On the bottom, the Slopedeck sports a proprietary Morphtech Base that "allows you to carve, hold an edge, and shred with stunning control."

I don't know if Speedland's SL:PDX trail running shoes will up your trail running game, but the Portland brand's high-performance, modifiable footwear will certainly up your mint green fashion game.

SL:PDX trail runners feature a Dyneema knit upper criss-crossed with a PeformFit Wrap and Boa Li2 lacing system for a quick, precision fit that's also easily modified on the trail if your feet swell, or you realize you made a wrong turn...of the dial somewhere. Inside the shoe you'll find a Carbitex plate for increased propulsion and protection. Or you won't, if you've taken it out, since the plate is removable.

If you can't go to the ocean, bring the ocean to - well, OK, not really. Razor's RipSurf is a "surfboard" for dry land, a design the company says will allow riders to carve out and cut on concrete just like they would...

When life gives you lemons...haul out your Portable Swing and strap it up to the nearest tree or lamppost. Nothing relieves stress and cures the blues like a little spontaneous to and fro'. Plus, think of all those times...

Go NBA, NCAA, or streetball with the Swish Portable Basketball Hoop. The backpack-style game gear includes a backboard and full-size, 18" rim with net, plus a regulation basketball, so you can launch pickup games and...

A vehicle roof rack that deflates and stuffs into a sack small enough to get lost under my car seat? That sounds Handi. The HandiRack is an inflatable and expandable set of rooftop "bars" that secures to most cars, trucks...

Drugs & alcohol, bullies, gluten--parents have got a lot of evils to worry about as they raise their children these days. So I get why a lot of them are anti-trampoline. Why add flying off a spring-loaded canvas bed and...

Developed in Norway, Dropracks are a super swell take on the roof rack that allow you to load your gear at waist height, so you don't drop as you rack up your kayak / skis / mountain bike, and spend the day nursing a...

Volkner Mobil RVs don't come with a Mini-Cooper, but if you want to make highest and best use of the motorhomes' center built-in car storage, I'd highly recommend getting one. Volkner says a new Fiat 500 would work too...

This inflatable Colorado Pontoon Boat is built to American Boat and Yacht Council standards, and comes with a motor mount, but if you want to go from floatin' to motorboatin' you'll need to supply the lips, cheeks, lung...

Field Candy makes a bunch of leisure and recreation goods, but I think their digitally printed tents are the most noteworthy. Fit for 2 to 3 people, the A-frame camping abodes have some real standouts in their collection...

If the SkyCurve Platform Swing can support up to four kids, why is there no talk of all the fun adults such as me and my friend Cornelius can have on it? First of all, the swing's surface looks like a trampoline, and...